Crossrail was the theme of a Policy Forum for London seminar on 11 October. 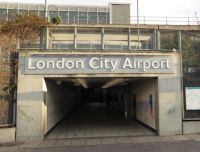 Business Travel News asked two of the speakers (David Leam of London First and Martyn Saunders of the planning company GVA) about a station for London City Airport.

Leam said he had been working for DfT when the route had been devised, but couldn’t remember why a station at Silvertown had not been included. He thought it could be self-financed by the airport, and was an opportunity to get more out of the railway. However, the Crossrail team were probably fully focused on getting Crossrail open to the new timescale and didn’t want any distractions.

Saunders noted that Crossrail was about fostering regeneration but failed to mention Silvertown, one of London’s most run-down neighbourhoods, through which the railway runs.

Andrew Sharp, the former director general of the International Air Rail Organisation (IARO), claimed there were sound precedents for building a station in less than a year.

Paul Moore of the London Borough of Bexley and one of the promoters of the Crossrail to Ebbsfleet scheme, said that their project could include a station at London City Airport.

It's bonkers not to have a mainline rail connection at LCY