Morgan asked to consider his position by transport chief

Sir Terry Morgan, the chairman of Crossrail, refused to contemplate resignation when asked to consider his position by Caroline Pidgeon,  Chair of the London Assembly Transport Committee, at a testy public meeting in City Hall London last week. Now officially the Elizabeth Line, it was due to open in December 2018. No new date has been set yet for the opening.  (See BTN 3 September “Year’s delay for Crossrail”) 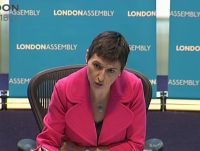 In October 2017, there was a serious fire at the Pudding Mill substation which caused a four-month “inconvenience”. The project was already under pressure and nobody would admit it. “On time and on budget” was the oft-repeated cry, but it was not the case. Val Shawcross, deputy mayor for transport, retired in May, and was replaced by Heidi Alexander.

A trial train was run to Abbey Wood in May of this year but it was no more than a PR exercise, with proper testing due to commence on 22 October.

Morgan refused to set a date for the start of the central London services. He would not even indicate. He did confirm that Abbey Wood to Canary Wharf was looked into as a pre-full introduction service, thus admitting that the sector could be easily isolated while a Silvertown Station was built.

For the hearing please go to webcam from where these images were taken. 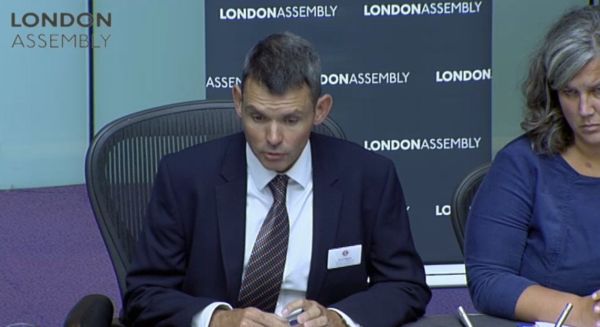 The final factor in London's winning the bid to host banking conference & exhibition Sibos in 2019 was Crossrail, facilitating the transportation of up to 10,000 delegates from Central London to ExCel. This delay is unconscionable; Morgan should go.