Taking time out from a stage appearance at the Aviation Festival (see in this issue) Air Baltic CEO Martin Gauss spoke to BTN. 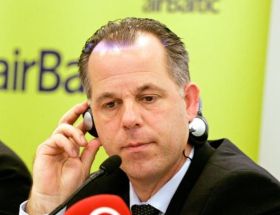 He explained that whilst a route into London City Airport was being monitored the airline sees the future as a one type operation.  “We are delighted with the C Series, now the A220-300”, he said.  “We are getting a 22% fuel burn decrease, the new aircraft’s 150-seat passenger load equal to the airline’s Boeing 737-300”.  Air Baltic plans to phase out its five Boeings and 12 Bombardier Q Series by 2022.

The Riga (Latvia) based carrier will take three aircraft this year, eight in 2019, and 12 in 2020, until it meets its 60-plane commitment.  It flies a two-cabin class operation with a Business Class, and a typical low-cost service at the back.  Tallinn has been added recently to the twice daily Gatwick route.

Majority state-owned, in the first half of 2018 revenues were up 19% with 1.9m passengers carried an increase of 20%.  Mr Gauss, in charge for seven years, sees a bright future for the airline. “This year we forecast the operational result higher than previous years. Still, we have to keep in mind such macroeconomic factors as oil price or US dollar exchange rate that might influence the overall situation.”