From US carrier JetBlue hinting at launching transatlantic services to a call from easyJet for legislation to ensure airlines recruit more women pilots, last week’s Aviation Festival in London provided the usual rich menu of controversy and comment on the state of the industry. 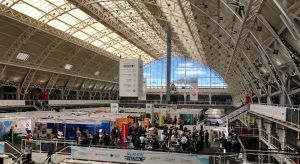 With a final count of 3,000 attendees, 300 speakers, 150 exhibitors and 1,100 airline and airport executives, the two-day gathering easily lived up to its billing as “one of the largest and most established aviation and travel technology shows in the world today”.

The venue, London Islington’s Business Design Centre, is ideal, a short taxi ride from the centre of town and Kings Cross/St Pancras with Eurostar, and with a Hilton next door, convenient for accommodation and private meetings.  Angel Tube is very close.

Industry top brass such as IATA, IBM and Lufthansa Systems are on hand to explain their offerings as well as a host of start-ups and specialist system providers.  It is a technology congress with A list speakers representing the actual airlines, the users of the knowhow.

Most of the participating companies are on a platform that you cannot miss as you arrive from the entrance vestibule and then it is a short walk to the conference centre itself with three large theatres available for simultaneous presentations. None really clashed except Paul Griffiths, CEO Dubai Airports, and Sir Tim Clark of Emirates.  A difficult choice.  Four other venues were available for presentations, often of a highly technical nature.

With no lack of controversy swirling round the industry, JetBlue’s UK-born chief executive Robin Hayes set the tone in the major suite, branding as “obscene” last-minute Business Class fares from New York to London in excess of $8,000 to $10,000.

In a broad hint he might do something about it, he added: “When we see that, we know we can go into it for a lot cheaper than that. We are the largest carrier at Boston; the largest market we don’t fly to is London.”

Founded in 1999, JetBlue boasts of being a low-cost carrier but with frills like seatback TVs and free drinks and snacks. It also offers a Business Class, called Mint, on long-haul flights across the US and to the Caribbean with lie-flat seats and meal service.

With bases at New York JFK, Boston, Fort Lauderdale, Long Beach and Orlando, JetBlue says it has “shaken up” US transcontinental routes, cutting advance-purchase business fares from around $2,000 to $599. 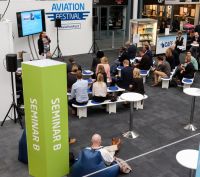 Hayes, who previously worked for British Airways, noted that flying time from Boston – London was only “marginally longer” than Boston – San Francisco.

JetBlue has 85 Airbus A321s on order with deliveries starting next year and an option to upgrade to the long-range model.  “We’ve not taken a final decision yet," he added. "But I think I have outlined how exciting the opportunity is.”  The airline also operates 60 Embraer E190s to be swapped for a similar number Airbus A220-300 from 2020.  Rather like AirBaltic they are not focusing on London City Airport with the -300, but are mindful of its possibilities with the smaller -100 aircraft.

Also in the forefront at AvFest was easyJet CEO Johan Lundgren, who told the industry newsletter atwonline.com pressure on European airlines was unlikely to ease anytime soon, as operational challenges continued to bite.

“In Europe, I don’t have a great deal of hope that things will get better,” he said, quoting ATC delays that would “not get better by themselves.” Airlines therefore had to focus on mitigating disruption, with data playing a key role – “data is going to be a game-changer.”

On product development, Lundgren said easyJet was working on a new frequent-flyer programme and forming direct relationship with hotels, rather than using consolidators. Updates would be given at the release of easyJet’s full-year results.

On Brexit, the CEO said he felt easyJet was well prepared after transferring 130 aircraft to its new Austrian AOC. He was also optimistic a deal would be reached for aviation.

“The feedback [from the government] is that everybody wants a deal in aviation. We believe flying will continue. It would be inconceivable for there to be no flights between the UK and Europe,” he said.

Separately, Lundgren told the Financial Times legislation might be needed to increase the number of woman pilots from what he said was its current low level.

Setting targets could be useful, he said, but “sometimes that is a slower process than some of the more aggressive methods like legislation”. 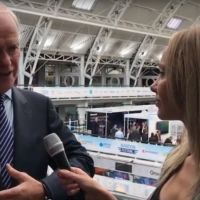 Among a large number of other top airline executives at the show, Emirates president Sir Tim Clark foresaw turbulence ahead in the form of trade disputes but said they were likely ultimately to produce a stronger world economy.

He said Emirates was dealing with a “triple whammy” in the form of weakness of many emerging economies, a strong dollar and higher fuel prices.

There was also “a simultaneous downward movement in emerging markets like Turkey, Argentina or Indonesia”, countries all served by Emirates.