Following his appointment as chairman of HS2 Ltd, Sir Terry Morgan last week confirmed he was stepping down from his role as chairman of London City Airport (LCY) and Crossrail in September to focus on the HS2 project. 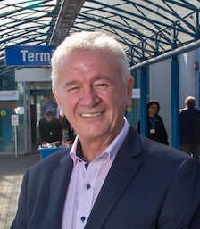 His appointment at the airport was controversial as he retained the Crossrail position in parallel with his LCY duties. Crossrail runs within 100m of LCY but does not stop. It was also announced last week that Crossrail’s opening has been delayed by up to a year (see story in this issue).

Sir Terry joined LCY in March 2017, and in the 18 months since steered the business as it launched the City Airport Development Programme, secured new airlines and routes and returned to strong passenger growth.

LCY CEO Robert Sinclair said: “Sir Terry has been an excellent chairman for London City Airport – one of the most respected, experienced and well-connected industry leaders in the UK. I wish him all the best at HS2, a significant national transport project.”

Sir Terry added: “It is an incredibly exciting time for London City Airport and it is with some sadness that I step down but I am confident LCY will continue to flourish under the board, shareholders and the leadership team.”