Unassuming but with a Massive Punch 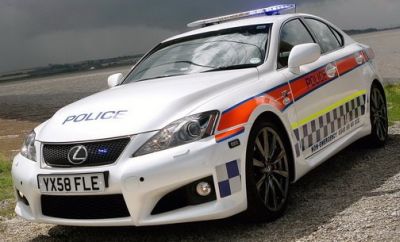 Looks can be deceptive, no more so than those of the Lexus IS-F 5.0 V8.  Here is a car based on what was originally designed as a premium grade ‘junior executive’ saloon alternative to the likes of the BMW 3 Series or the Audi A4.

It has been created by equipping it with Lexus’ most powerful stock engine, a V8 road burner churning out 417 bhp from its 5-litre engine and if ever there was a so-called ‘Q’ car, this is it!

At a glance it looks a conservative sort of car that would probably pass unnoticed in a lot of company car parks though closer scrutiny reveals four large exhaust pipes, a rear spoiler, cosmetic wing vents behind the front wheels, a bigger than standard bonnet housing large twin air intakes and sporting high powered active headlamps.

Climb into the driving seat and there is little evidence that this car is extra special. There are the usual high quality appointments and excellent finish that is the Lexus norm though the clues are the presence of paddle gear shifts on the leather covered steering wheel, white faced instrument dials with blue hands and a goodly supply of aluminium trim, including the twin pedals and foot rest.

The electrically powered driving seat is supportive and reasonably comfortable but not deeply upholstered and the cabin ergonomics and driver vision (aided by a rear view camera when reversing) makes the driver feel welcome to the task of exploiting the car’s performance qualities, providing that a combined fuel consumption figure of 24.8 mpg and an urban figure of 16.8 mpg are acceptable.

Few will probably be able to savour the outright potential of a top speed claimed to be governed to 168 mph though all drivers will appreciate, under safe conditions, the shove in the back acceleration from rest to 62 mph (100 kph) in a claimed 4.8 seconds!

It is this performance potential that has recently encouraged Humberside Police Road Crime team to add examples to their fleet…so watch out when venturing to the North of England!

Fire this car up and it really does fire up with a vigorous exhaust burble and a feel of vibrancy through the car’s body that reminds me of some of the potent racing saloon cars prowling around the pits and paddocks before being unleashed onto the race track.  To a great extent this car also replicates the enjoyable experiences of raw power I recall from driving the Lotus Carlton saloon back in the early 1990s.

Power is dispensed to the rear wheels via a highly responsive 8-speed automatic transmission that is certainly responsive to the throttle in a busy manner that makes me wonder whether all those cogs are necessary to control such a broad spread of power.

Lexus has been able to take on the established high performance saloons regularly offered by the likes of BMW, Mercedes-Benz and Audi etc. as a result of having a platform that can cope with a lot more power than the original 2.0-litre with which it started life.

This means a fully independent suspension system that has been extensively reworked to add more grip and stability while retaining the impressive responsiveness of the original though at the cost of a very firm ride despite the selectable Sports Dynamics system.

Braking performance through four ventilated discs with all the electronic aids is highly efficient and easy on the leg muscles while the electrically assisted steering is sufficiently responsive to enable a discerning driver to optimise the performance in both an enjoyable and safe fashion while providing an easy driving character under heavy traffic conditions.

As with all Lexus products the lifestyle is to a very high standard, competitive with the opposition, this car not lacking in upmarket equipment and is tastefully rather than elaborately trimmed and designed to protect its occupants with an array of no fewer than ten airbags, including one to protect the driver’s knees.

A very special car for a very special driver, the Lexus IS-F is a memorable experience, prioritising performance over practicality to create a car of outstanding qualities that does not attract too much attention.

AUDI: A Stop-Start economy function is now offered on the Audi A3 automatic transmission models at a cost of £1,420.  The cars already have a kinetic recuperation system to harness energy created during braking.  A3 1.4 TFSI and 1.6TDI are the first models to benefit with prices starting from £18,905 on the road.  First Deliveries are being made.

BMW: Around 4,000 low-carbon emission BMW vehicles will provide support for the 2012 London Olympic Games.  Lord Coe, Chairman of the London Organising Committee, recently announced that BMW would be the Tier One Partner and the exclusive automotive sponsor of the Games.

FORD: A voice control system is now available from as little as £150 on the Ford car range - standard on the top models, optional on the smaller models. The system can operate climate control, audio and satellite navigations systems.  In another marketing move  £99 service is being offered through Ford dealerships. The offer also includes a years free roadside assist.

PEUGEOT will shake up the mid-sized MPV people carrier this  January when it launches its new 5008 model in the UK.  Taking up about the same road/garage space as an average sized hatch back and offered in five and seven seat forms, the new model is powered by 1.6 and 2.0-litre ultra high efficiency/refinement engines developed in conjunction with BMW that proved impressive performers in pre-announcement test driving.  An impressive vehicle to drive, cleverly designed for practical, comfortable and easy lifestyles, the 5008 builds on the exceptionally high quality standards evident on the current Peugeot car putting the product in direct competition on build quality with established prestige car brands.  With prices starting from £16,895 I would say that the Peugeot 5008 is the ‘sale of the century’.

PORSCHE: A further development of the 911 GT3 R will debut for the 2010 motor sport season.  Designed to meet the FIA GT3 regulations the car is reported to provide easier handling and better driveability.

QATAR has new Rolls-Royce showroom on Pearl Island, the Emirates  most exclusive address.  Qatar, unlike neighbour Dubai,  relies on oil and gas for funds. www.newspress.co.uk/counter/Rolls_Royce/click.php?id=51

VOLKSWAGEN: Hard on the heels of the sales launch of the 5-door VW Polo range, comes the announcement of a 3-door version aimed at a wider customer audience with prices starting from £9,435 on the road - a saving of £600.