Top business destinations Cologne and Pittsburgh are joining the British Airways network as part of a winter/spring build-up, with the German city gaining a new four-a-week service from Gatwick from 16 November this year. 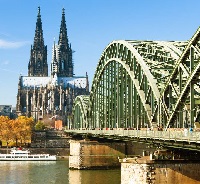 It means passengers during the winter season will be able to fly direct for the first time with BA, with services taking off on Mondays, Thursdays, Fridays and Sundays.

The addition of the Cologne route also marks a BA build-up at Gatwick, following the introduction of a year-round three-a-week Gatwick – Las Vegas flight and an increase in the number of flights it operates to other cities from the airport this winter.

Meanwhile, BA in April next year will become the only airline to offer a direct flight from the UK to Pittsburgh when it launches a year-round four-a-week service to the Pennsylvanian city from Heathrow.

The new route will take the number of US destinations the airline flies to from London to 26, and the number of daily flights offered by BA and American Airlines as part of their transatlantic joint business to 67 a day.

The route will be operated by Boeing B787-8 Dreamliner, with flights departing on Tuesdays, Wednesdays, Fridays and Sundays.