New details including an image of the proposed route map have been released for HS4Air, the proposal for a high-speed railway around London connecting both Gatwick and Heathrow. The proposal is being submitted to the Department for Transport in response to a call for ideas within the rail sector.

HS4Air has been developed by London-based Expedition Engineering together with architect Weston Williamson + Partners (WW+P) and planning and development consultant Turley.

The project, dubbed “the M25 for high-speed trains”, is estimated to cost £10bn and would connect HS1 at Ashford to HS2 northwest of London via Heathrow and Gatwick with a spur connection to the Great Western Main Line.

Backers say the new railway would allow train journey times to be slashed between the UK’s two most important airports and their hinterlands in southeast England to the Midlands, North England and South Wales.

Heathrow and Gatwick would become multi-modal regional transport hubs with many passengers using the stations even if not catching planes, while HS4Air would remove London as the historic barrier for railway connectivity, the supporters say. 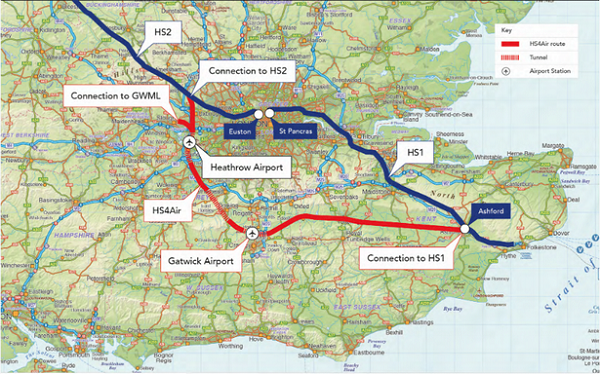