The prospect of a takeover of Norwegian by a larger airline group was revived last week after Lufthansa CEO Carsten Spohr said his airline was “in contact” with the carrier. 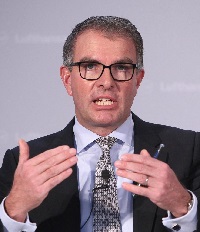 Lufthansa is the second company in the industry to say it is interested in Norwegian, following International Airlines Group (IAG), which bought a 4.6% stake in the low-fare carrier earlier this year (BTN 16 April).

IAG said at the time it wanted to open discussions that might include the possibility of a full takeover but Norwegian CEO Bjørn Kjos has already rejected two IAG takeover offers since.

Spohr attempted to dampen speculation about a quick decision, saying any deal would depend on price, the “strategic merits” of a takeover and approvals by competition authorities.

In an updated situation report last week, Norwegian said it had received expressions of interest by several parties to acquire shares, enter into a full takeover or form partnerships, all of which showed the attractiveness of its business.

The airline is regarded as a possible takeover target after posting a NOK2.2bn (about £203m) operating loss in the first quarter of 2018, coming as Norwegian expanded capacity by 36% in the same period, mainly transatlantic long-haul.

Moves by legacy airlineson Norwegian have a suggestion of anti-competitiveness. I trust that the competition authorities are taking notice of the situation.