Gatwick formally gets a new owner 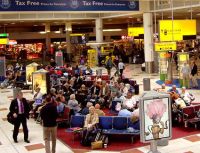 GLOBAL INFRASTRUCTURE PARTNERS (GIP), the new owners of Gatwick Airport, in formally taking over from BAA have promised to kick-start a new era of competition between London’s airports.  Sir David Rowlands, Chairman, said: “Gatwick is now a major independent airport company and from today, for the first time ever, it is competing directly with Heathrow, Stansted and Luton, as well as with our other airport, London City, in a competitive London airports market.  Gatwick will be competing vigorously against all London airports for point-to-point, short haul and long haul routes and passengers.  Our plan is to gain a competitive edge by modernising Gatwick, providing more efficient operations for airlines and a better experience for passengers and to do this as cost effectively as possible.  We intend Gatwick to become the airport of choice for airlines and passengers in our target market.”  GIP also announced the appointment of Stewart Wingate as Gatwick Chief Executive Officer.  Mr Wingate was previously Managing Director at Stansted, CEO at Budapest Airport and a former General Manager at Black & Decker. www.gatwickairport.com