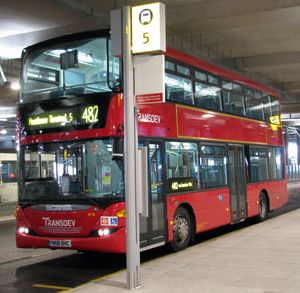 HEATHROW is now accessible even earlier by public transport following an initiative between BAA, Transport for London (TfL), the London Borough of Hillingdon and British Airways.  The four organisations are funding timetable changes to various bus routes so that they start up to an hour and a half earlier, getting both airport workers and passengers to Heathrow for around 04:00.  Routes 423 (Hounslow to Terminal 5 via Hatton Cross), 482 (Southall to Terminal 5 via Hounslow West and Terminal 4), 490 (Richmond to Terminal 5 via Twickenham, Feltham and Terminal 4) and 555 (Shepperton to Heathrow Central Bus Station via Sunbury, Ashford and Terminal 4) all now leave their starting points at around 03:20 each morning.  Routes 350 (Hayes to Terminal 5 via Stockley Park and West Drayton) will join the early starters on 19 December.  In addition to the new earlier buses, there are already several TfL bus services running 24 hours a day.  These are the 105, 111, 140 and 285.  Night bus N9 also runs from Central London to the airport from around midnight to 06:30. www.heathrowairport.com/commuter