Emirates has become the first international airline to land a scheduled commercial flight at the newly-inaugurated passenger terminal at Muscat International Airport as Oman celebrated the replacement for the 1970s building which the airport had been using.

Emirates, which has been flying to Oman since 1993, marked the occasion by deploying one of its special ‘Year of Zayed’ Boeing B777-300ER aircraft, highlighting the ties between Oman and the UAE.

Officials say the terminal, which sees Muscat catching up belatedly with Doha, Abu Dhabi and Dubai in terms of airport facilities, will significantly improve conditions for passengers travelling to and from the Omani capital.

Hub carrier Oman Air, whose rapid growth has seen passenger traffic at the airport rise from 7.5m in 2012 to 12m in 2016, has complained in the past that its growth was being affected by the cramped conditions of the old building.

Capacity of the former terminal was around 8m passengers a year. The new building can handle 12m, while plans for three expansion phases, to be built according to demand, will see capacity rising to 24m, 36m and then 48m. 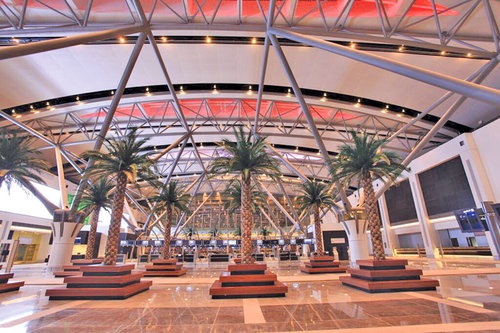