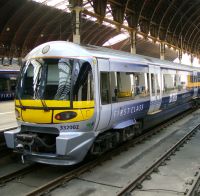 PADDINGTON STATION’S Heathrow check-in facility is to return after being dropped as a cost cutting exercise by British Airways.  This time however the service will use automated common use self-service machines.  It is the first time these machines have been used at a UK railway station with the next step to have them installed on board the trains, particularly suited to the Heathrow Express and its tunnel friendly internet facility.  Delta Air Lines, Iberia and United Airlines are initially on the system and will be followed at a later date by British Airways, Finnair and Virgin Atlantic.  Departure display boards are also being introduced, which will also hopefully eradicate any confusion regarding which airport terminal to go to. www.baa.com