Word and pictures by Eryl Crump: 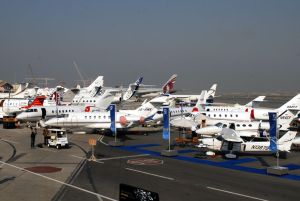 It is amazing to be reminded but last week’s Dubai Airshow was the 11th in the biennial series with 890 exhibitors from 47 countries and getting on for 50,000 visitors.

Dubai attracted the world’s most advanced aircraft to its air show but organisers had few surprises with contracts for new aircraft.

The value of deals announced during the five-day event, £13bn, paled in comparison with two years ago, when Gulf airlines led a US$155bn spending spree.  Activity in the halls and static display area was a little more energetic with a third exhibition hall available and more than 120 aircraft on display.

Opening the show Sheikh Ahmed Bin Saeed Al Maktoum, President of Dubai Department of Civil Aviation, described it as “timely and on the cusp of a business upturn.”

He said: “The air show comes at an important time for the aerospace industry.” 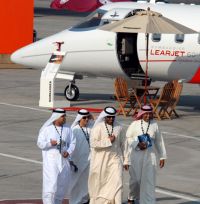 European plane maker Airbus was the clear winner in the sales race receiving more than five times the orders by value of US rival Boeing, but in truth the figures are academic, plane makers always keen to use show opportunities to announce sales.

Airbus received US$5.3bn (£3.2bn) in orders and letters of intent, against two orders worth US$800m from Boeing.

Chief Operating Officer John Leahy said: "We had a good air show, better than many expected.  Our industry is not out of the woods yet.  There will be a difficult winter ahead of us.  But with the deals we made in Dubai and the interest in our products that we saw here, spring may not be that far away."

Yemenia ordered ten Airbus A320. Ethiopian Airlines placed a commitment for 12 Airbus A350-900s worth US$2.9bn, and Senegal Airlines, the new national carrier of the Republic of Senegal, signed a letter of intent to purchase four A320 family aircraft and two A330s.  The airline will launch services in early 2010 from its hub in Dakar to destinations in Africa and Europe.  Airbus officials also announced a requirement for one A330-200 and one Airbus A320 from Nepal Airlines.  The manufacturer also revealed its sharklets, a new fuel-saving device on the wings of its best-selling A320 aircraft.  Air New Zealand will start taking delivery of these aircraft in 2012.

Boeing announced deals for seven 737-800 jetliners to Algeria's government-run Air Algerie and four to Tassili Airlines, also of Algeria.  Randy Tinseth, Boeing’s marketing chief for commercial planes, was encouraged by the order that the economic downturn was ending.  He said 2010 would be the year of recovery and airlines would return to profitability in 2011.  Mr Tinseth added the growth would come from the Middle East as well as “China, India and other emerging markets with dynamic populations and growing incomes.”

His comments echo those of Airbus President Tom Enders earlier this week.  Mr Enders had said the market was improving and added there was no longer talk of cancellations and deferrals.

He said: “We are at the end of a very difficult year for both airlines and manufacturers.  But the orders and announcements made at this air show in Dubai send a very strong signal of recovery in 2010 for the whole industry." 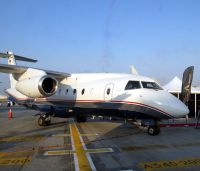 Switzerland-based executive jet operator Comlux announced the purchase of its third Airbus Corporate Jet (ACJ) at the show.  The order brings its total fleet of Airbus corporate jets to ten aircraft including four A318s, three ACJs, two A320 Prestiges and an A330-200 Prestige.

However it was not just the “big two” who were announcing orders.  Brazilian manufacturer Embraer brought its new Lineage 1000 to the show.  A conversion of the poplar E-190, the aircraft can be configured for a variety of roles.  A few places further down the static line Embraer's brand new Phenom 100 VLJ was on display.  Oman Air signed a contract for five Embraer 175s at the show.  The deal also includes purchase rights for another five aircraft.  The initial delivery is scheduled for the first quarter of 2011.

But the main activity in the executive market appeared to be the recycling of older airframes. 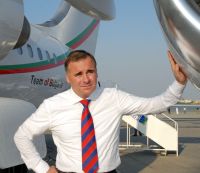 A luxuriously appointed Avro Business Jet attracted a large number of visitors during the week.  Buyers can expect to receive change from US$20m for a fully refurbished and bespoke styled aircraft Steward Cordner of BAe Systems confirmed.

Following its early successes with the conversion of Bombardier CRJ-200s Project Phoenix, a Dubai-based company,  is looking at moving into new airliner types including Airbus and Boeing.

328 Support Services in Germany announced its securing FAA Repair Station Approval enabling them to expand conversion activity on the type into the USA.

Several Gulf-based firms were promoting the sale of Boeing 737s.  AeroToy Store had a hush-kitted 737-200 on display.

At all the major air shows it is always the big plane orders that make the headlines, but in fact it is the lower echelon deals that take place in the chalets and halls that are the nuts and bolts of the industry.  Typical was DAE Capital, part of Dubai Aerospace Enterprise US$40m order for wheels and carbon brakes for its planned Boeing 737 fleet.  The pledge, to supply 70 Boeing 737 next generation aircraft to be delivered from the US plane maker from next year, went to Messier-Bugatti of France with DAE Capital CEO, Bob Genise, citing its “lightweight design, lower cost of ownership and resultant fuel burn reduction” as key selection factors.

The location for the next show was still in doubt as the doors closed for the last time.  Plans had been made to move the entire exhibition to the new airport being built at Jebel Ali in time for this year, but completion of the new facility has been put back until June 2010 and there were clear indications exhibitors, buyers and onlookers will be back at Dubai's current airport in early November 2011.