The dispute between manufacturers Boeing and Bombardier over alleged subsidies (BTN last week) intensified on Thursday after the Canadian company condemned US plans to impose import duty on its aircraft.

Boeing alleges Bombardier is subsidised by the governments of Quebec and Canada, allowing it to sell C Series aircraft to Delta Air Lines at a loss. The US Commerce Department has reacted by proposing an 80% “tax” on any aircraft sold in the US.

Bombardier’s statement said: "We strongly disagree with the Commerce Department's preliminary decision. It represents an egregious overreach and misapplication of the US trade laws.”

The company said the decision was “an apparent attempt to block the C Series aircraft from entering the US market… the Commerce Department's approach throughout this investigation has completely ignored aerospace industry realities.

The statement added: “Boeing's own programme cost accounting practices – selling aircraft below production costs for years after launching a programme – would fail under Commerce's approach.

“This hypocrisy is appalling … the US government should reject Boeing's attempt to tilt the playing field unfairly in its favour (by imposing) an indirect tax on the flying public through unjustified import tariffs.”

Bombardier has set up a dedicated website on the matter at  http://the-plane-truth.com 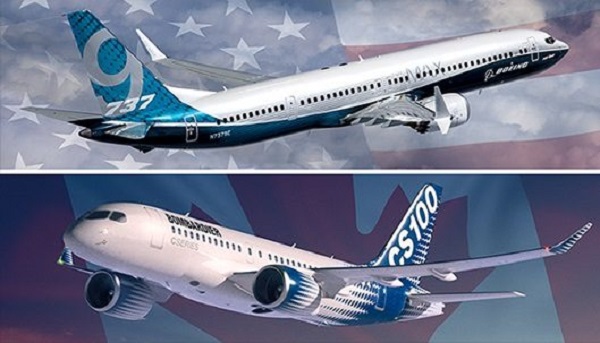