A new North American gateway at Philadelphia with services four times a week from and to the Dublin hub is being launched by Aer Lingus as part of its 2018 summer schedule. 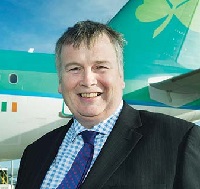 COO Mike Rutter said the latest route expansion comes on the back of investment in new aircraft, with Aer Lingus taking delivery of four new long-haul models in the past 24 months.

Next summer will mark the airline’s largest long-haul programme to date, with 177,000 additional seats across the Atlantic over the season for a total capacity to and from North America for 2018 of 2.75m seats.

The transatlantic expansion includes a daily service to both San Francisco and Los Angeles plus twice-daily flights to Chicago. Miami, launched as a new route this summer and subsequently as a new winter route, continues into next summer operating three times per week.

Washington DC will continue to operate daily for summer but on a larger Airbus A330-300 series aircraft for four out of seven days, providing 31% additional seats on the route.