ON TOUR: Waverley. BTN takes a “cruise” on a paddle steamer 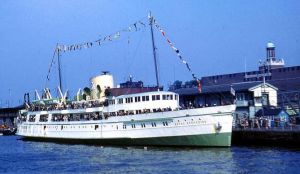 In the years between the two World Wars, and for a short while after, excursion on the Thames to Southend and Margate were hugely popular with the paddle steamers Royal Sovereign and Royal Eagle the mainstay of the trips.  But it was not to last and by the sixties such voyages were but fond memories.

PS Waverley is named after Sir Walter Scott's first novel.  She was built in 1946 to replace the famous earlier Waverley built in 1899, which served in the Second World War as a minesweeper and was sunk in 1940 while helping to evacuate troops from Dunkirk.

Shipbuilders A. & J. Inglis of Glasgow launched the new 693-tonne steamer in October 1946.  She was quickly put to work serving the islands and inlets around the Clyde.  After a revival of fortunes in the 1950s, the 1960s saw a gradual change in holiday habits that led to a decline in passenger numbers and the closure of many of the small piers.  In 1973 the Waverley was withdrawn from service only to be saved from the scrapyard by the Paddle Steamer Preservation Society (PSPS), a registered UK charity.

A public appeal was launched to secure funding for the return of the Waverley to service and the fund-raising operation was successful.

The PSPS found itself running a cruise ship operation, "Waverley Excursions".  Since then Waverley has been joined in the PSPS fleet by PS Kingswear Castle and MV Balmoral, and has had a series of extensive refits and much restoration work, including a new boiler and improvements to meet modern safety standards.

Between 2000 and 2003 the ship underwent a substantial rebuild and reboilering at the shipyard of George Prior at Great Yarmouth, funded principally by the Heritage Lottery Fund. The work added many 21st century safety and technological improvements but also returned the ship to her original 1947 livery.

Every year she circumnavigates Great Britain venturing into many small ports not normally visited by large passenger ships.  Whatever package you buy for the day out PSPS will get you back to the starting point, but by the nature of the way the trips operate sometimes it is by coach, or even train.

The Editor in Chief reports on a £20 trip down the Thames. For him it was the realisation of a childhood wish.

"It was to be a short ‘cruise’ on Waverley from Tower Bridge to Gravesend on a recent balmy Saturday morning, the booking made via the Ocean Liner Society.   There were over 600 souls on board and a safety drill was carried out as soon as we cast off.  The upper decks crowded as the very knowledgeable commentator told us about the history of the river and the docks that no longer exist.

It is surprising how busy the Thames is, even at the weekend, with water taxis scurrying around, tour boats plying their trade, and the occasional leisure craft.  It seemed ages until a tug turned us around, Tower Bridge to go up, and for Waverley to be on her way.   “What is that”, an American voice asked pointing out the City Hall glass carbuncle, a Norman Foster controversy.  It proved impossible to explain that it was not the City of London headquarters at all, that is Guildhall, but a typical mismanaged idea by the former  London leader Ken Livingstone in moving the Greater London Council from its convenient spot close by Westminster and the real seat of power, to an inaccessible point opposite the Tower of London.  Calling it City Hall was a Livingstone ruse.  Fortunately he was never able to grab the real “City”.

Downstream we went with the ugly Tower hotel port (left hand side) and the shops and restaurants that inhabit Butlers Warf starboard.  Next up the Metropolitan (river) Police facility to our left  and the old houses and ancient drinking establishments that sit by the riverside including the Prospect of Whitby.  Looming up ahead, seemingly to our starboard side, was Canary Wharf, the river cutting back on itself and the massive complex actually to port. 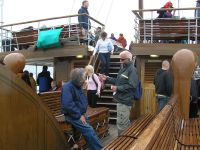 We passed where the Great Eastern was launched on the Isle of Dogs, 20,000 tonnes and in theory 4,000 passengers in 1856, not to be surpassed in size during the nineteenth century.

Next up Greenwich, the Cutty Sark and the Old Royal Navy College.  Not a sign of the proposed new cruise terminal.

Saturday morning is quiet for London City Airport (last departure is 12:00 noon) and the man doing the talking on Waverley clearly fine on ships but lacking when it comes to flying.  On our port side the lock gates looked very small for Fred Olsen Lines Boudicca, and 30,000  tonnes, but she made the Royal Albert Dock to serve as an accommodation ship for the London Olympics.

Passing by the runway landing lights it was on to a less interesting reach of the Thames and time to explore this fine ship.

Passengers passing on either side of the engine room can see the huge piston rods driving the cranks on the shaft that turns the paddle wheels on each side.  Gleaming brass machinery.   Driving the ship along at a steady 15 knots it is described as a three-crank diagonal triple-expansion marine steam engine.

Waverley’s restaurant serves a selection of snacks and meals. The traditional steamer dining saloon offers refectory style dining and you can reserve your seat and purchase a hot meal in advance for your chosen mealtime.  You need to eat fairly quickly as only 45 minutes is allowed per booking and it is simple grub, typically fish and chips for £8.50.

If the weather is kind the Caledonia Tea Room opens on to the promenade deck where you can sit and enjoy your lunch on deck whilst soaking up the sun and scenery.  It serves a selection of teas, coffees, sandwiches, soup, cakes and ice-creams.  Deep down is the Talisman bar for a quieter drink. 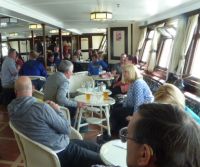 It would not be a traditional Clyde paddle steamer without a glorious bar and with Jeanie Deans you are in something of a throw-back from an earlier age offering draught lager, beer, cider and Guinness along with a selection of spirits and mixers. Sit back and relax with a refreshing drink as you watch the scenery slip by.   The Malt Whisky Bar on the lower deck serves over 30 Malts for the aficionados.

Today Waverley operates a season from April to October starting her season sailing amidst the stunning scenery of the Western Isles and exploring the West Coast of Scotland.  She then visits Liverpool and North Wales followed by the Bristol Channel before moving onto the South Coast and then the Thames for London.  She also undertakes private charters and provides a period setting for television documentaries and movies. 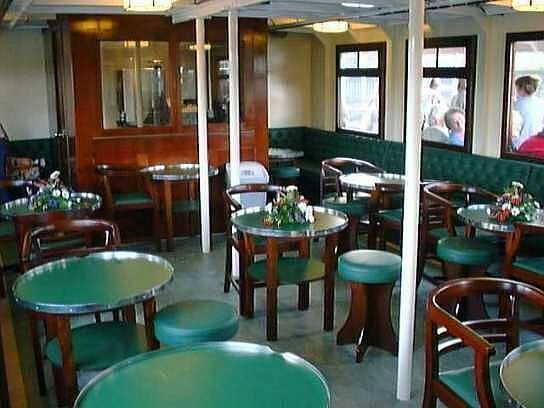 Finally past Tilbury and the London Cruise Terminal with just down the river, and laying very low, the Tilbury Fort, a Thames guardian. (See BTN 3 July)

Gravesend came up very soon and it was quickly through the busy Saturday morning high street of the little former navy town, and onto what has become its saviour the high-speed Kent Express into Stratford (16 minutes) and St Pancras (24 minutes).  South East London is given a big miss.

If reading this piece, you have a sudden urge to try Waverley this year on Tuesday (3 October) she ventures from Margate, visiting Whitstable, Southend and Gravesend with various sectors on sale.  On Thursday Great Yarmouth is the starting point for stopping at a number of piers along the Thames Estuary, with Friday, Saturday and Sunday Tower Pier the starting point for the last trip of the season.  Bookings for 2018 are expected to open in February".  www.waverleyexcursions.co.uk

I have spent many relaxing relaxing hours on board Waverley, both on the Thames and in Scotland. As a wonderful way to sit and watch the world float past, it can't be matched, unless you are in First Class at FL360...! If you haven't tried it yet I would thoroughly recommend it.