ON TOUR: Amsterdam and Antwerp. By ship.

Three-night cruises seek a number of different markets. Those who have never taken to the sea before; an opportunity to try a new ship; a leisure break, or in the case of CMV’s Columbus, a maiden voyage (see CRUISE NEWS in this issue). Depending on the ports visited it can also be seen as an easy and quick way of taking an introductory visit to a new destination. BTN editor-in-chief Malcolm Ginsberg and wife were on board. 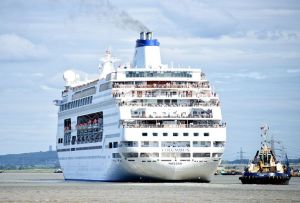 With a maiden voyage (no disembarking passengers) and a quiet port such as Tilbury, it was easy to board early, find one’s stateroom, have a quick snack and disembark for a couple of hours to take a look at about the only place of real historical interest in south east Essex.

Tilbury Fort  is run by English Heritage and is  only a quarter mile from the terminal. It was once the guardian of the Thames.

The fort is a very pretty structure with a huge parade ground, and was fine on a pleasant summer’s day, but presumably very bleak for serving foot soldiers in years gone by on a dark cold winter’s evening. 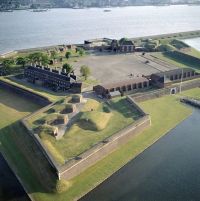 The 17th-century defences are considered by the historian Paul Pattison to be the "best surviving example of their kind in Britain".

The fort was originally constructed by King Henry VIII to protect London against attack from France and expanded over the years; its final military use was in the Second World War as an anti-aircraft gun establishment.

If you are on a back-to-back cruise and berthed for the day, it is worth a visit.

The World’s End Pub is just near by, and the site was also once a ferry point, crossing the Thames to Gravesend. 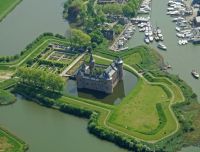 The arrival at Amsterdam could not be more low key. After the long early morning passage via the North Sea Canal from Ijmuiden and its mighty lock system, once the world’s largest, we arrived quietly at the Amsterdam Cruise Terminal and the ship tied up with not a soul to be seen. Finally, the single air bridge into the terminal found its way opposite a ship’s gangway door but while Columbus has been to the port before, with different paint schemes, a coupling was deemed not possible. More waiting while the ship’s own passageways were sorted out. At least the captain put back the departure time straight away!

The modern cruise terminal is a 10min walk to Amsterdam Central Station, or you can take a tram. There are bikes to be hired.

Amsterdam has been visited by  BTN  many times before, so we thought we would try something different, at least for the morning. Muiderslot, now commonly known as Amsterdam Castle, seemed a good idea, a picturesque moated fortress frequently seen on film. You can hire the venue for a commercial undertaking, or a wedding.

For those who can manage two-wheeled transport, and about 10 miles, it is just 45min from the cruise terminal. By public transport, it is not quite so easy.

From the central train station, take the frequent service to Weesp, and then it is by bus. However, the frequency of the local service is not too good – once an hour. Check the timetable (online).  You drop off in the centre of Muiden, itself a very picturesque canal-side village with plenty of choice for dining, and a busy yachting marina. 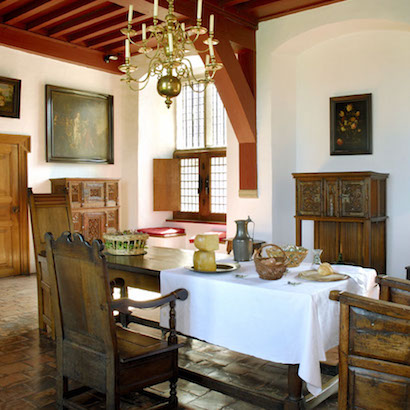 Dating from 1280, the castle was originally built to protect Utrecht, one of the most important trading towns of that era. Amsterdam was but a village. During the 17th century, the castle was extended but more for its social use than as a serious defence position, eventually becoming a prison and falling into disrepair. It was not until the start of the 20th century that real work began on its restoration and it is now a national museum (Rijksmuseum).

Join a tour (make it an English one, the multilingual versions can be tiresome) to learn about the history of the building and climb from the courtyard through the various chambers with their displays of armour and military wear, a medieval kitchen and dining room, and, being Dutch, plenty of fine paintings.

There is free wi-fi so you can download the Muiderslot App, which gives a walking tour of the castle and the extensive and very pretty grounds. There is a café within the courtyard and you can also visit the intimidating dungeon. 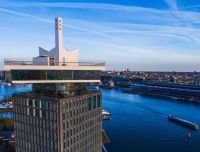 In the afternoon, we took the free ferry from the station to the new (2016) A’Dam lookout as it moves through 360 degrees 20 storeys up overlooking Amsterdam and beyond. Wonderful views and a direct comparison with the Eiffel Tower and the London Eye.

From the ground floor to the top in 22sec. The very brave can take the swing, with the river 100m below.

No time for the Ma’Dam restaurant, which offers a two-course lunch from €27.50 and a three-course dinner from €39.50. The diners looked happy, and there is a bar too. On the 19th floor, there is the equally intriguing Moon revolving fine-dining establishment with its totally panoramic view of Amsterdam as never before. Here the prices start at €40 for lunch and €50 for dinner.

The welcome at Antwerp could not be compared with Amsterdam's. Right in the centre of the city, the port-supplied gangway was up in no time and a tourist board courtesy "land train" appeared, ready to take visitors to the Town Hall Square (Grote Market), the centre of everything. In any event, Antwerp is flat and most of the interesting sites are within a 15min walk. The Grote Market also houses the offices of Visit Antwerp, only too pleased to help.

A vast array of coaches were quayside to take visitors on tours, Brugge being particularly popular (See BTN 21 November 2016 and 22 October 2012)

We have been to Antwerp in recent times and so on this occasion tried to take in some new and unvisited places, but lunching again at Hoffys in the centre of the Jewish diamond area. 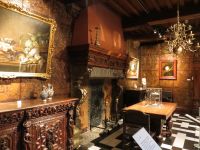 The Rubenshuis (Rubens House) is the former home and studio of Peter Paul Rubens (1577–1640), sited in the very centre of Antwerp old town. Designed by him and based on studies of Italian Renaissance palace architecture. it is now a fine museum. Rubens, a prolific painter (at least 1,400 known pieces including woodwork, engravings and furniture), was one of the most important artists of his time, not only for his own works but the way he influenced others. His most famous pupil was the young Anthony van Dyck, the painter of King Charles I. Rubens himself was knighted.

Antwerp Central Railway Station is an imposing design from around the turn of the last century with the tracks on two levels. It is intriguing and well worth a look into if you are a train buff. It adjoins the Antwerp Zoo, which covers 26 acres, is home to 950 species and attracts more than 1m visitors a year.

Using the "one-day" citycard, it was on to a bus and down to the regenerated dockland area and the remarkable MAS structure, built in 2010 and in eight floors telling the story of Antwerp. Housed on each level is a large exhibition hall, each one with an outstanding display, some highly controversial. On Level 7 was “Life and Death – Gods and Mankind”.  We preferred Level 6, the story of Antwerp as a port over the years, including some superb model ships, and Antwerp a la Carte, on Cities and Food, one floor down. The rooftop view was quite awesome with nothing on one side but docks and industry, and on the other a view into the city and the 123m spire of the ancient Antwerp Cathedral, another enticement to fit in with your 24hr card.

In truth, Antwerp deserves more than a rushed daytime visit. You can go by Eurostar via Brussels, take the short sea crossing through the Channel ports, or use CityJet, non-stop from London City Airport with frequent services. And just like in the Netherlands, everyone is friendly and seems to have a smattering at the very least of English.