Booking is now open for the last lunch of the Aviation Club’s summer season on Thursday 14 September at the Institute of Directors in London, when the guest of honour will be Embraer Commercial Aircraft president and CEO John Slattery. 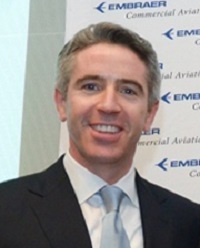 He was appointed to his present position in June last year, having joined the manufacturer in March 2011 as VP for customer finance and asset management.

Before that, he spent 15 years in executive and leadership roles at a number of aircraft leasing businesses and financial institutions and is a well-known industry figure.

Embraer has been in the news after the Johannesburg-based carrier SA Airlink said it would soon start the first commercial air service to St Helena in the South Atlantic using an Embraer E190-100 (BTN 31 July).

The company has also delivered the first of five of its Phenom 100 business jets on order from Affinity Flight Training Services for the UK´s Military Flying Training System (MFTS) programme (BTN 7 August).

The Aviation Club’s first winter lunch will be on Wednesday 8 November, when the speaker will be the IATA director-general and CEO Alexandre de Juniac.