Seven new winter destinations are joining the Lufthansa network from October as the airline continues to expand its European network. Pamplona, Genoa, Bari and Catania will be served from Frankfurt, and Nantes, Glasgow and Santiago de Compostela from Munich. 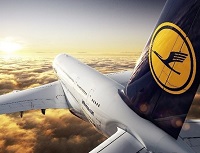 Pamplona is on the Lufthansa flight schedule for the first time and from 6 November onwards will be served by four flights a week. Services to the three new Italian cities served from Frankfurt will operate up to three times a week.

The flights depart starting on 29 October and will expand on the services already offered from Munich.

Also from Munich, there will be daily flights to Nantes while Glasgow will be served four times a week. Santiago de Compostela is on the flight schedule every Sunday as an addition to the services on offer from Frankfurt.

Lufthansa had already announced last month an increase in services to three UK and Ireland destinations this winter (BTN 12 June).

It will add an additional weekly service on routes from Frankfurt to both Dublin and Manchester from 29 October, increasing capacity by around 30% on the Dublin service, and 25% on the Manchester route. The Glasgow – Munich service, which until now has been seasonal, will now operate four times weekly this winter.