A second daily A380 service between Dubai and Birmingham is being introduced by Emirates from 29 October. The airline is replacing the Boeing B777 which currently operates Flight EK39/40 with the larger super-jumbo to meet demand. 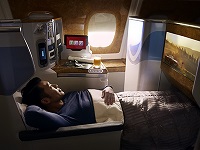 “Emirates’ decision to use a double-daily A380 service was in part driven by huge demand from passengers to travel on the iconic aircraft,” the company said in a statement.

“Since the first A380 service from Dubai to Birmingham launched on 27 March 2016, more than 300,000 passengers have already flown on the aircraft between the two cities.”

Emirates said the A380’s popularity was due partly to it featuring the widest individual in-seat Economy Class screens in the industry, at 13.3in, and offering more than 2,500 channels on its in-flight entertainment system.

As with the current A380, the aircraft will operate in a two-class configuration, with 557 seats in Economy Class and 58 flat-bed seats in Business Class, and offer the Emirates’ Onboard Lounge.

Emirates’ growing A380 network to key long-haul destinations such as Auckland, Bangkok, Beijing, Perth, Singapore and Sydney means passengers flying beyond Dubai have an increased opportunity to fly on the aircraft on both legs of their journeys.