Akbar Al Baker has been instrumental in shaping the development of Qatar Airways into one of the fastest growing and most highly acclaimed airlines in the world – named Airline of the Year in 2011, 2012 and 2015 and runner up in 2013, 2014 and 2016 by global industry audit Skytrax. Born in Doha, he is a graduate in Economics and Commerce and worked at various levels in the Civil Aviation Directorate before becoming Qatar Airways’ group chief executive in 1997. Al Baker has spearheaded the growth of Qatar Airways, which operated only four aircraft in a regional capacity prior to his appointment and now flies 199 aircraft to more than 150 destinations across six continents. 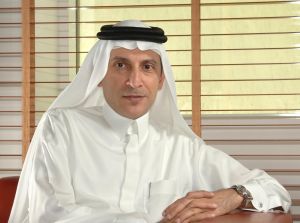 Qatar Airways is known for many world ‘firsts’. It was the first airline in the Middle East to receive the Boeing 787 Dreamliner and the first airline in the world to welcome the new Airbus A350 into its fleet as global launch customer, to name but a few. We are always innovative and last week announced our introduction of the very latest Inmarsat GX Aviation in-flight broadband solution (See this issue of BTN).

This year has certainly seen us carry on this momentum to be the very best in what we do and place the passenger experience first and foremost; this after all is the secret to our success.

In February, we were the first airline to set a new world record by commencing non-stop service between Doha and Auckland, the world’s longest commercial flight at 17:30hr and a distance of 14,535km. Our state of the art Hamad International Airport, which offers seamless connections to more than 150 destinations around the world, was also the first and only airport in the Middle East to be awarded the prestigious five-star rating by Skytrax.

Our most significant first this year, though, came in March at the ITB Exhibition in Berlin, where we introduced to the world our new First in Business Class product, ‘Qsuite’, a truly unique and patented Qatar Airways product.

Qsuite brings the experience of First Class travel to all of our Business Class passengers and introduces the world’s first-ever double bed to Business Class, with privacy panels that stow away to allow passengers in adjoining seats to create their own private space. Not only this, but adjustable panels and movable TV monitors on the centre four seats allow colleagues or families travelling together to transform their space into a private social area where they may dine or work together.

This revolutionary new product will launch this month on the Doha –   London Heathrow route, in celebration not only of the 20 years that we have now been flying to this destination but to highlight the important ties between Qatar and the UK, to which we operate more than 70 flights each week to London, Edinburgh, Manchester, Birmingham and, recently announced, Cardiff.

However, after 20 years of service, we know never to rest on our achievements, but rather focus on how we can make each journey memorable for all our passengers, placing them first at every stage of their journeys, be it on the ground or in the sky. For those wanting to experience a little more of what Qatar itself has to offer, Qatar Airways also recently launched a stopover programme for all of its passengers, offering free visa and free hotel accommodation in four- and five-star hotels to those who wish to break up their journeys in Doha.

Looking ahead, we will continue our route network expansion plans and will this summer launch Dublin, Nice and Skopje, followed by exciting destinations such as Santiago, San Francisco, Lisbon and Prague, as well as many more.

It is with this network expansion in mind, combined with the continual development of the latest product offerings for our passengers, with which we look forward to the future.