Competition between low-cost carriers operating in Europe is accelerating as Norwegian, in the same week as the launch of IAG’s Level (see this issue), announced it is to begin flights between Rome and three US cities from November. 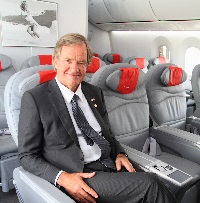 The US destinations are Los Angeles, New York Newark and Oakland San Francisco. They will be served by new Boeing B787 Dreamliners in a two-class configuration with Economy and Premium cabins.

Rome becomes Norwegian’s seventh long-haul European destination serving the US following Barcelona – Level’s base – which will launch this June, Paris, London and the three Scandinavian capitals Copenhagen, Oslo and Stockholm.

Norwegian says it will launch at least 25 new routes linking Europe with the US this year, including 12 transatlantic routes to be operated by the Boeing B737-MAX out of  the Republic of Ireland, Northern Ireland, Scotland and Norway.

Norwegian chief commercial officer Thomas Ramdahl said: “We will soon offer more transatlantic routes than any other airline, meaning more US and European jobs and more affordable fares for travellers."