CMV GETS THE VOTE

BTN lists the new ships as cruising continues to boom 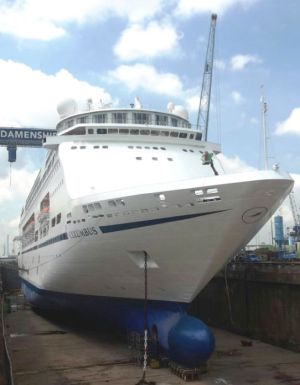 TV presenter Angela Rippon will be at the London Cruise Terminal on Election Day, Thursday 8 June, to name CMV’s impressive new flagship Columbus.  It might well be that celebrations go well on into the night as guests party away the evening.

Who will be rejoicing remains to be seen but events over which he has no control will not worry Mike Hall, Head of Marketing at Britain’s fastest growing cruise line.

“When the Prime Minister made the announcement, and the date, we could not do a U-Turn.  Everything was firmly in place. Vote early in the day if you are joining us and watch the events unfurl on the big screens.”

Originally built by the famous Queen Mary 2 yard Chantiers de l'Atlantique, at Saint-Nazaire (France), Columbus comes to CMV from the Carnival Corporation.  She has just spent three weeks in dry dock at Rotterdam in a multi-million pound make-over, joining CMV as its seventh, and by far its largest, ship.

Whilst there are a host of changes from its previous life as Pacific Pearl its most significant modification is the reduction from 812 cabins to just 775.  CMV is very much after the single traveller market, and for those who want their own solo accommodation with up to 250 berths available.  CMV is very much into 'Middle England'

BTN will be reporting in full on Columbus next month.

Due back in service yesterday (4 June) after a £34m refurbishment is Queen Victoria, one of our favourite ships (see BTN 2 May 2016).  She has spent the last month at the Fincantieri Shipyard in Palermo (Italy), adding new luxurious cabins in the stern and a lido sun deck – only one of the many highlights amongst the new and refreshed on-board features.  Cunard has released a stunning time lapse video link and is confident enough of the ship’s sea qualities to leave on a further clipping taken earlier this year in a rather rough southern ocean.

Cruise Lines International Association (CLIA) has announced the cruise industry has surpassed 2016 ocean cruise passenger projections, reaching 24.7 million cruise passengers globally up from a projection of 24.2 million. For 2017, based on the current new vessel launch schedule and expected regional deployment, CLIA is projecting another positive year of growth for the industry with a passenger forecast of 25.8 million.

“One of the many reasons that the cruise industry continues to thrive is because of the personalisation it is able to offer to its guests from around the world,” said Cindy D’Aoust, president and CEO, CLIA. “Never before have I been a part of or seen an industry that is so good at listening and reacting to what its customers want, and this is why we are going to see our industry continue to grow.”

Much of the industry’s growth can be attributed to the continuing development of the Asian market, with ocean capacity in the region rising to 9.2% in 2016, a 38% increase from 2015. The increased capacity, combined with travellers in this region going on shorter, and more frequent cruises, has kept this marketplace at the top of emerging markets within the cruise industry.