The controversial airport at St Helena welcomed its first commercial passenger flight on Wednesday with the arrival from Cape Town of a chartered SA Airlink Avro RJ85 regional airliner with 60 passengers.

Although regular revenue operations are considered still some way off, the flight, carrying people stranded by the breakdown of the ship that normally serves the island, was a significant development.

The aircraft was chartered by aviation services group Air Partner. The passengers, including St Helena governor Lisa Phillips and a baby born in Cape Town, were welcomed by large crowds as it approached from the north before touching down smoothly on Runway 20.

After a quick turnaround, it departed with 48 passengers bound for Cape Town via Windhoek.

St Helena has a new airport, built at a cost of £285m, but it has been deemed too risky for use by large aircraft due to unforeseen problems with windshear, which are still being investigated.

SA Airlink (BTN 20 February) is among  carriers who have said they are interested in running a regular air service. Another is island-based Atlantic Star Airlines, which has said it is “ready, willing and able” to start international flights (BTN 19 December 2016). 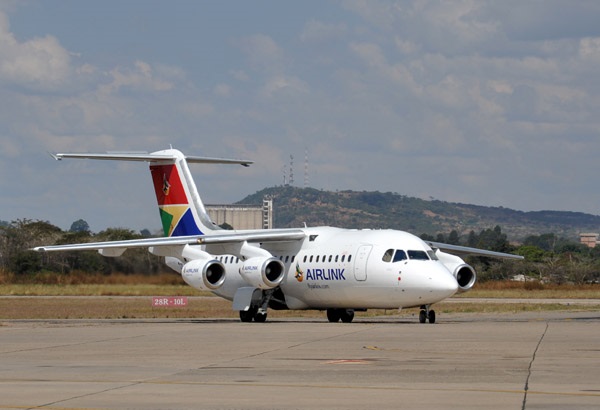 Is that St Helena? Looks more verdant than I would have expected and the runway markings vary from what I expected.