Johannesburg-based regional carrier Airlink is hoping to add St Helena to its network using a new fleet of Embraer jets it is assembling under a modernisation plan to allow it to fly to more long-distance destinations. 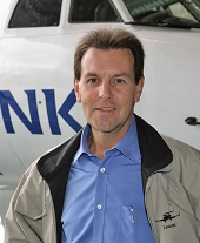 The privately-owned company said it was replacing its short-haul fleet with a new line-up that would include five Embraer E-Jets, which it said it would begin receiving in the first quarter of 2017, and 11 Embraer ERJ 140s with greater range.

Airlink CEO Rodger Foster said the acquisition of the E-Jets was aimed specifically at replacing the airline’s fleet of Avro RJ85 aircraft, as the E-Jets “offer significantly more range than our RJs”.

Another advantage was that the E-Jets also offered superior short field, hot and high, and wet runway operational performance, he added.

The St Helena government has requested South African carriers, including SAA, to bid to begin service to the isolated island from this May. Island-based Atlantic Star Airlines also wants to start international flights. (BTN 19 December 2016).

The new airport on the island has been deemed too risky for use by large aircraft, due to unforeseen problems with windshear, which are still being investigated.