ON TOUR: The Peak District (Part 2) 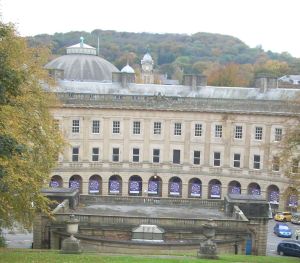 The Peak District, often called the Derbyshire Peaks, is a huge area in central and northern England, lying mainly in northern Derbyshire, but also covering parts of Cheshire, Greater Manchester, Staffordshire, and South and West Yorkshire. Most of the region falls within the Peak District National Park. AERBT visited the region earlier in the year and was so impressed that an autumn return was pencilled in. This time we concentrated on the northern part and the area around the lovely spa town of Buxton. ON TOUR 17 August

We are experienced National Trust property visitors. As such we are aware that most houses and buildings are not open daily but have hours to suit local needs. Many are closed Monday and Tuesday but Lyme Park, Stockport, is different. The main house is only available Friday through Tuesday. Check opening times on the internet before visiting a National Trust property.

Why choose Lyme Park to visit. Friends from Manchester rave about it. It actually is in the Borough of Stockport, which does not have an appealing ring.

Lyme Park lies within the Peak District National Park, covers 1,500 acres and is where the deer for the Royal herd in Windsor Great Park come from. It is 180 miles from London, 12 miles from Manchester and about the same from Buxton.

The massive estate was granted to Sir Thomas Danyers in 1346 as a thank you for saving the life of the Black Prince at Crecy and passed to the Leghs of Lyme by marriage in 1388. It remained in the possession of the Legh family until 1946 when it was given to the National Trust. The mile-long drive to Lyme Park House creates a real sense of anticipation, to which the building more than matches up.

The main structure dates from the latter part of the 16th century and has been modified over the years finishing up with elements of both Palladian and Baroque styles, a sort of Italianate palace. In the early part of the 20th century the house operated in the grand Edwardian style, effectively only lived in by the Legh family for three months of the year. Inside there are incredible Mortlake tapestries, an important collection of clocks, beautifully furnished quarters, along with a colourful family history. You saunter from impressive room to impressive room.

To the south of the house is a lake and formal gardens plus an orangery. It is a delightful amble. This is where Jane Austen’s Darcy and Elizabeth meet at 'Pemberley'.

You can dine in a restaurant with a set meal actually in the house. Venison from the park is always on the menu. A pleasant alternative is the café in what might be termed the commercial area by another lake.

A 15-minute stroll across parkland takes you to The Cage, an 18th century hunting tower, currently only open on the occasional weekend but about to be redeveloped. We are told that from the top you can see Liverpool Cathedral on a good day.

Buxton is for all intents and purposes the capital of the Peak District. It is a very pretty and thriving market town, best know for its spa, which dates from Roman times. Out of the very busy tourist season parking is easy. There is a railway station with regular services to Manchester and Stockport for connections to the west coast main line. A pedestrian precinct provides all manner of shopping.

Amongst the many outstanding buildings in Buxton is the magnificent 900-seat Opera House opened in 1904 and designed by the prolific theatre architect Frank Matcham, who went on later to build the London Palladium. The theatre is the centrepiece of the Buxton Festival usually held in the middle two weeks of July.

The Opera House sits in the very centre of the town adjacent to the 23-acre Pavilion Gardens, with its lakes, bandstand, and (during the summer) a miniature railway. It is surrounded by fashionable Georgian houses. Adjacent to the theatre is a well provided conservatory, itself leading to a locally provided informal resturant, and then to the town’s information bureau. The local indoor swimming pool, part of the Pavilion Gardens complex, is supplied by water from the spa.

Now a centrepiece for the University of Derby, the Dome started out life as a stable, became the Devonshire Royal Hospital, and now is an educational establishment specialising in catering and travel. Fine dining can be obtained for as little as £10 for a three-course meal. Visitors are made welcome. The dome itself has a greater span than St Paul’s Cathedral and Rome’s Pantheon and St Peter’s and is used as both a learning and entertainment centre. The building also houses a very modern spa, served by hot waters from the Buxton springs. Once again it is open to the public but like all the University offerings is subject to the campus timetable.

Perhaps the most exciting development in Buxton is the redevelopment of The Crescent into a spa hotel for which approval has just been gained. Originally built in 1780, it was the first ‘resort’ hotel to be built in Britain and the heart of Buxton’s growth as a fashionable holiday venue. In recent times used as Council offices, permission has now been gained from Nestlé, owner of the mineral water rights, for a major investment which has just started and could be completed by the end of next year. With its position virtually opposite the Opera House, The Crescent Thermal Spa Hotel will be a real boost for the town. 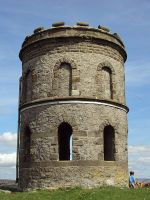 On the edge of the town is Buxton Country Park and Poole’s Cavern. The park includes a 100 acre wood planted by the 6th Duke of Devonshire in 1820 to hide the eyesore caused by quarrying and lime burning. The park is dominated by Solomon’s Tower, essentially a folly built in 1834 by Solomon Mycock to provide work for the town’s unemployed and latterly restored in 1996. Both are examples of a social conscious nearly 200 years ago.

Poole’s Cavern is at least two million years old and known to the Romans. Mary Queen of Scots may have taken a look when she was initially a “guest” of Elizabeth. Today it offers a visitors’ centre and some 300m of spectacular show caves plus the largest stalactite and stalagmite viewing in Derbyshire. You can see some incredible calcite crystal formations.

Our lodgings for what was a two-day, one night, Buxton visit was the East Lodge Hotel and Resturant, on the A6, close by the little village of Rowsey. It is where the rivers Derwent and Wye meet. It has several nice looking pubs and a large factory outlet shopping mall.

Buxton is 15 miles across the Dales to the west and Matlock five miles due south. Chatsworth lies less than three miles away and Haddon Hall even nearer.

East Lodge has a Double AA Rosette and deservedly so. Conde’ Nast gave it the prestigious “most excellent service” award. The dining was superb and the breakfast outstanding. There are only 15 rooms and each is different.