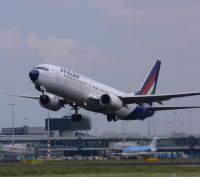 MALEV, the national flag carrier of Hungary, could be rescued from its latest financial crisis by the Budapest administration.  It was in February 2007 that the state airline was privatised, a 49% shareholding taken up by a Russian government controlled bank, the balance acquired by Hungarian investors.  It soon afterwards joined oneworld and appointed as CEO Lloyd Paxton, a 35 year old British Airways veteran, who had previously held the same position at Air Astana.  Paxton lasted a bare three months.  Malev no longer operates across the North Atlantic and concentrates on intra-European routes. www.malev.hu