Long-time London City Airport resident CityJet has signed an agreement with KLM Cityhopper for not only the eight-times-daily LCY – AMS route but various KLM Amsterdam services to Belfast. Birmingham, Bordeaux and Hamburg. 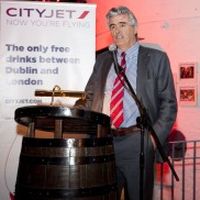 “It is part of our move away from scheduled routes to white-hull flying for major carriers” said CityJet chairman Pat Byrne. “85% of our business is now wet leasing, where we supply the aircraft and crew”. The airline, now 25 years old, will this summer operate 44 planes.

Bryne said the plan over the next two years was to dispose of some Avro RJ85 aircraft but retain seven for the foreseeable future. “We are very, very pleased with the RJ,” he said. “It’s precursor, the 146 was our first ever aircraft. Passengers really like it. On the London City – Dublin route, we are the largest carrier.” The airline is to drop the Rotterdam flights. “Certain LCY operations will not sustain two carriers,” he said. The airline also flies to Toulon on a daily basis.

Byrne said deliveries of the Sukhoi SS100 continue and the airline will have six in service by the end of the year.

CityJet currently owns a fleet of 12 CRJ900 aircraft which are on wet lease service with SAS, with a further 10 aircraft on order.