This is the time of the year when the cruise lines get busy for the European summer season. We report. 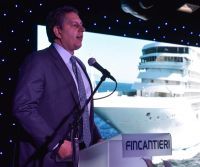 New ships arrive, usually from the Italian yards, while others change owners and name, emerging often as something entirely different.  Some ships are docked, up to three weeks, for multi-million dollar refurbishments.  It is also a period when the travel trade goes into a selling frenzy, offloading slow sellers from what is called “the shoulder period” with some very good bargains available.

With the April Business Travel News cruise news we are covering all the above points with BARGAINS completing this issue.

On its shakedown voyage this week is Silversea’s Silver Muse, a slightly larger and evolved version of Silver Spirit which was our year-end review December 2012.  Spirit was very good and we are promised something special with Muse.  A full report next month.

Gaining a major makeover at this time is the former P&O Arcadia which will emerge in early June as CMV Columbus.  If you want to view the ship, or even night-stop with dinner, bed (cabin), breakfast and a show included, and Tilbury is convenient, CMV is offering a number of packages at attractive prices prior to its maiden voyage.

Jade is due to depart Port Tampa on 30 April, bound eventually for Hamburg, its summer home port this year, although Southampton will be a boarding point where BTN will be joining. Internally Jade is virtually a new ship with every stateroom refashioned including fresh carpets, furniture, flat-screen televisions, larger headboards with USB charging outlets and different new artwork.

The exclusive Haven area, atop this ship with its private villas and suites, has been extensively remodelled and there are new eateries and bars.  The 2017 summer itinerary includes the Baltic, Norwegian Fjords and North Cape.

The appropriately named Celebrity Escape has discovered a previously unknown island 720 nautical miles South West of Bermuda which has ‘escaped’ the gaze of seagoers over the centuries.

Celebrity Escape, currently sailing with 120 crew on board and no guests, is used exclusively by Celebrity Cruises to research new destinations and itineraries that cruise travellers of the future might enjoy. The ship’s past escapades include test sailings in one of the world’s largest swimming pools at the San Alfonso del Mar resort in Algarrobo (Chile), and attempts to cruise between Southampton and New York in just three days.

Early reports indicate that this previously unchartered and uninhabited island is one of the Caribbean’s last remaining gems, complete with sandy beaches and idyllic bays. On board the ship, crew have broadcast images and videos of the newly discovered island on their social media accounts.

Captain of ‘Celebrity Escape’ and experienced Master with over 23 years of ocean-going service, Yilo Apradfolos, explained:  Celebrity Escape is very much a pioneer ship that tests and explores new experiences but this is the first time that we have found a whole new destination. The entire crew is gobsmacked, and enjoying exploring the features of the island to ensure that we have truly unlocked one of the region’s last remaining paradises. I can report that the sand on the beaches is golden, and the afternoon light is ideal for shooting the perfect selfie.”

As yet, the island remains unnamed, but the discoverer Celebrity Cruises has the honour of christening the remote archipelago. The cruise line is looking for a contemporary name that reflects the rarity of the event, and captures the essence of ocean going adventures.

Captain Yilo Apradfolos adds:  “We need our guests’ help in finding a suitable name for the new island. Anyone can submit their ideas via social media using the hashtag #IslandX.”

Entries for the naming competition close at midnight on 21 April 2017.

This story was issued by the Celebrity press office on 31 March with an embargo for the next day.  It was taken up enthusiastically by some media all over the world.

SPRING CRUISE BARGAINS   A special selection. (And if your cruise line is not mentioned was an entry supplied to meet the BTN deadline?)

CELEBRITY has a very interesting ‘Presidents Cruise’ on Eclipse from Southampton to Iceland on 7 May taking in St Peter Port (Guernsey), Cobh, Dublin (Ireland), Akureyri (Iceland) and finishing at Reykjavik with interior stateroom prices available from £999.  You can enjoy a free Classic Drinks Package and choose one exclusive extra or $300 to spend onboard, unlimited wi-fi or free gratuities.  The return flight is not included but flight prices from Iceland are very competitive with a choice of airlines and no air tax to pay.  www.celebrity.com

CRUISE & MARITIME (CMV) will begin operating from Wales for the very first time this year. Marco Polo will be sailing from Cardiff to the Norwegian Fjords, Spain, Portugal and France, and a Summertime Gardens & River Seine cruise, ideal for garden lovers. In addition, there are three exciting departures on board Magellan from Newport including a cruise to the Norwegian Fjords.  Marco Polo leaves Cardiff 24 May for La Rochelle (France), Bilbao (Spain), includes an overnight stay in Lisbon (Portugal), Leixoes (Portugal) – the port of Oporto and La Coruña (Spain) before returning to Cardiff. Fares from £599pp.  www.cruiseandmaritime.com

CRYSTAL has on offer a 10-night cruise from Antwerp to Honfleur on Crystal Symphony. The cruise starts with an overnight in Antwerp on 3 August and visits Edinburgh (double overnight to coincide with the Edinburgh Tattoo), Amsterdam (overnight), Tilbury and Guernsey, before finishing with an overnight in Honfleur. All-inclusive fly/cruise prices from £2,854 per person (originally £4,077 per person) including return scheduled flights, overseas transfers and 10 nights in a deluxe stateroom with picture window with all meals and soft drinks, most alcoholic beverages, port taxes and gratuities. Also included is a two-night Paris land programme post cruise.  www.crystalcruises.co.uk

CUNARD has available some real bargains if you want to try for the first time a short cruise, or just have a few days away.  On 8 May Queen Elizabeth departs Southampton for a return trip to Hamburg.  The four-night trip includes two full days at sea and a real chance to explore the ship and enjoy the many facilities on board.  Oceanview stateroom prices start from £379. If the mighty Queen Mary is for you why not spend two nights on board from 22 May and take in the picturesque town of Bruge. Fares from just £279.   www.cunard.com

NORWEGIAN CRUISE LINE (NCL) has an interesting seven-night cruise on 16 April from New York on the mighty Breakaway to Orlando, NCL’s private island at Great Stirrup Cay, Nassau and back, from £569 including various add-ons.  You pay for your own flight (the cheapest being its airline namesake) and also stay in New York for perhaps a couple of nights.  An alternative on a number of dates is a three-day stopover at the British colony of Bermuda.  The island has a distinctive blend of British and American culture, which can be found in the capital, Hamilton.  www.ncl.com

P&O is offering a 14 night cruise on Britannia (B716) from £1,449 per person for an inside cabin.  Departing 4 June, the price includes full board meals and entertainment on board.  Departing from and returning to Southampton, ports of call include Helsinki, St Petersburg (overnight in port), Tallinn, Stockholm, Copenhagen, Oslo and Bruges.  www.pocruises.com