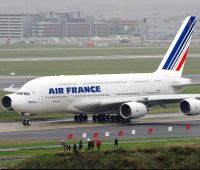 AIR FRANCE has taken delivery of its first Airbus A380.  Capacity is 538:  La Première-First – 9 seats on the main deck; Affaires-Business – 80 seats on the upper deck; and Voyageur-Economy – 449 seats spread over the two decks.  Three of the 12 aircraft on order will be delivered to Air France between now and spring 2010, to be closely followed by a fourth.  The aircraft will be introduced on 23 November 2009, 380 seats auctioned off for the Air France Foundation for Children charity.  Air France A380 will be operated on daily flights between Paris Charles de Gaulle and New York JFK, followed by Paris – Johannesburg during winter 2009-2010. www.airfrance.com