British Airways is to launch Club Europe (business) on its domestic services between London and Belfast, Edinburgh, Glasgow, Inverness and Manchester on 1 April (see COMMENT in this issue). 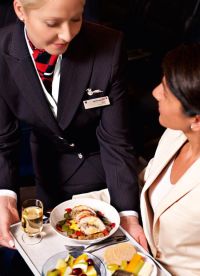 The new cabin service coincides with the introduction of single-class flights on the Aberdeen and Edinburgh routes to Heathrow by Exeter-based Flybe, Britain’s third largest airline, which also claims to be the biggest regional operator in Europe.

This will be the first time BA has faced direct competition on UK provincial destinations since the demise of Virgin Red in September 2015. Flybe has gained the slots via the Heathrow Trust but would need to be give them back should the routes fail. Heathrow Airport Ltd has a policy of encouraging competition on routes, but must not favour one airline over another.

Taking 3 May as a guideline (as of 12 March), BTN compares the cheapest single fares tax paid:

BA Edinburgh – Heathrow from £65 Euro Traveller and £364 Club Europe. There are savings to be made on connecting flights

If your destination is London, depending on where, Edinburgh is particularly well served with Gatwick, Heathrow, London City, Luton and Stansted all with frequent services.