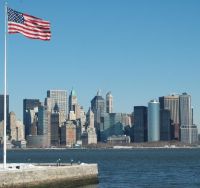 US DEPARTMENT OF COMMERCE says that international travel to the United States will regain its footing by 2010 following its first forecasted year of decline (2009) since 2003.  Reflective of the current global economic environment, visitors to the US are set to decline by 8% this year followed by a 3% increase in 2010 and 5% through 2013.  In 2009 22 of the top 25 arrival markets will post declines.  The largest is from Taiwan (-17%), Ireland (-14%), Sweden (-13%), Mexico (-12%), and Netherlands (-10%).  These declines come after the United States hosted a record 58m international visitors in 2008.  The UK is projected to post a 12% decline in 2009.  Germany, France and Italy are the next largest arrivals markets within the region with declines of 8%, 1% and 6% respectively. www.tinet.ita.doc.gov