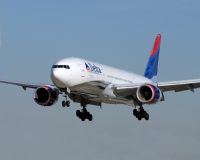 DELTA AIR LINES (DL) has released details of its summer 2010 schedule, including the launch of eight new international routes.  The new services, all effective from late May through early June next year, include daily services from New York JFK to Copenhagen and Stockholm, as well as three times a week to Abuja, capital of Nigeria.  The carrier will also launch a five times weekly non-stop 777-200ER flight between Detroit and Hong Kong, as well as services from Seattle to Beijing and Osaka.  Also new are DL flights from Atlanta to Accra (Ghana) and Detroit to Seoul, while the schedules also boost flights between Detroit and Shanghai, Los Angeles and Tokyo, and Seattle and Amsterdam. www.delta.com