ON TOUR: Lisbon – Good value even for Europe

Portugal has always had a great affinity with Britain. It is after all our oldest ally and the mother of its most famous prince, Henry the Navigator, was the sister of the formidable Henry IV. Portugal is in the same time zone as the UK and any view across the River Douro from Porto reveals one British winery after another – Sandeman, Taylor’s, Croft to name but a few. 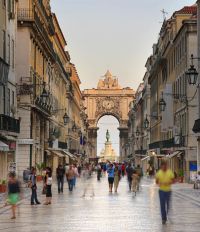 The Duke of Wellington is revered for his defence of the country against the Spanish and in the 21st century a certain Portuguese was firstly made very welcome at Chelsea, and latterly with Manchester United.  And the weather suits the Brits, not too hot in the summer and ‘sensible’ in the winter.  The Algarve, in the very south, was showing 15 degrees last week (the first week in February).  A report by Malcolm Ginsberg.

Even with the drop in the value of sterling Portugal is cheap compared with other holiday destinations in Europe.  For summer 2017 Lisbon, Porto and the Algarve are expected to boom with North Africa mostly out of bounds and Turkey having problems of its own.  There are a multitude of flights all year round from the UK to Lisbon, Porto and Faro the three main airports.

As an irregular visitor to Lisbon over the years I always find it delightful.  The city is changing dramatically with a mayor in charge determined to bring it up to date in the 21st century.   Due to be completed this summer is an entirely new tramway system and interwoven road complex.  This will make life far easier not only for the local inhabitants but for visitors too.  The changes are dramatic.

Lisbon is the second oldest capital in Europe, after Athens, and during the Middle Ages was the centre of the nautical and trading world.  Portugal owned an Empire.  The city is full of history with more and more of its past being uncovered as it rebuilds.

Three hotels were visited during a stay last October. (Also see CRUISING in this issue). 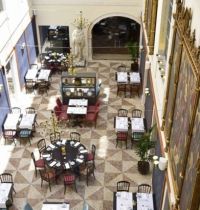 Firstly the Pousada de Lisboa sitting on the edge of the Praҁa do Comércio square, and once housed the Ministry of Internal Affairs and the office of Salazar – the country’s infamous dictator.  The position of the 5-star property is perfect and the rooms have views towards the river across the famous square.  Dining is classic Portuguese but the one thing I did find strange was the indoor swimming pool, spa and fitness centre.  You can descend down a spiral staircase from an upper floor but approaching from below the only way into the pool itself is via a step ladder.  www.pestana.com/uk/hotel/pousada-lisboa

Close by is the AlmaLusa Lisbon, a new and enchanting 28-room boutique property.  Set in the historic Praça do Município, opposite the city hall, it offers an ideal position for visitors wanting to embrace the city’s past within a short walk of Alfama and the atmosphere-laden fado bars.  What makes the hotel very unusual is a combined marketing exercise with the archaeologist tour guides Time Travellers.  There are half a dozen walking tours available plus a day trip to historic Sintra.  www.almalusahotels.com/en/hotel 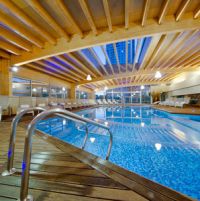 My third hotel was the Corinthia in the business quarter and about five minutes’ walk from a Metro station.  It is not quite the magnificence of the London property but very upper 4-star. Very unusual is the main dining room which offers both waiter and self-service.  You pay the same and for the main course the chef will cook in front of you.  Even if you are not staying at the hotel try the restaurant.  The price is keen.   www.corinthia.com/lisbon

To visit Lisbon and the surrounding area really needs a week.  A car is an unnecessary luxury with a fine metro system, good bus services and cheap taxis.  Take one of the open top tour buses as soon as you arrive to get the lie of the land.

Where to start?  Lisbon is a dream destination for foodies and wine lovers.  The famous bacalhau (salted cod), in its various forms, is not to be missed. The choice of restaurants is bewildering but recommended was the Sacramento do Chiado. Set in a former noble residence, the Valadares Palace, the building dates back to the 18th century when much of Lisbon was reconstructed following the devastating earthquake that shattered the city in 1755. The meal was delicious, served beautifully and well worth the walk up yet another steep hill from the Baixa, the bustling central shopping area of the city. For a local fish meal it was a quick walk to the Cais do Sodre rail terminal and the nearby Restaurante Pescaria, clearly popular with the locals.

Not far away is the Time Out Market, opened in 2014, which now receives two million visitors a year and has since become the number one tourist attraction in the city.  It was a success from day one with 35 outlets selling regional specialities, such as Azeitão sheep's cheese, Alentejo ham, local custard tarts, sardines, wines and chocolates. Five top chefs have restaurants here. The original fish, fruit and vegetable market stalls occupy the other half of the landmark building.  Time Out, an international publishing group, plans later in 2017 to replicate Lisbon with a new venture in Commercial Street London E1 opposite Spitalfields Market.

Lisbon has museums too numerous to mention, even one for money where you can step through a bank vault.  The building was once the Church of St Juliao and in the basement,  now excavated,  is the remains of what is called ‘King Dinis’s wall built in the 13th century to defend what was a bustling riverside city.  A timeline takes you through the history of one of the most important monarchs of the era, and explains the damage done by the 1755 earthquake.  The whole museum is quietly sponsored by the Bank of Portugal.

High up overlooking the city is the São Jorge castle complex the first fortifications dating from the 2nd century BC.  Over the years it has been built and rebuilt by successive occupiers of the city, including the Moors, Spanish and the various Portuguese Royal dynasties. The main entrance to the citadel is a 19th-century gate surmounted by the coat-of-arms of Portugal, the name of Queen Maria II, and the date 1846.  There is excellent international/Portuguese terrace dining with tremendous views.  The tram goes nearby but for walkers from Baixa a short cut is via a public elevator which is strangely situated within a supermarket.

A short walk from the first two hotels, is Cais do Sodre terminal of the Cascais Line which makes its way along the banks of the River Tagus to the charming fishing village of the same name.  It is the sort of place you can walk, shop, dine and even swim. En route is Estoril, once the home of European Royal exiles, hosting the largest casino of the Iberian Peninsula. 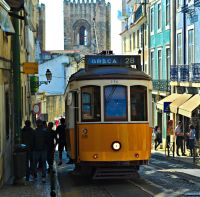 On the way back get off at Belém to explore the National Coach Museum, the Presidential Palace, the Electric Museum and the Belém Tower, built to defend the city from the Moroccan pirates.  The Discoveries Monument is an imposing concrete monument that celebrates Portugal’s explorers and the era of discovery. There is an observation deck at the top of the monument which provides wonderful panoramic views. The area has some fine botanical gardens.

Open this year is a new cruise terminal a short walk from Praҁa do Comércio.  The open top buses provide a service from the terminal when ships are docked.

The Lisbon region lends itself to various tours.  These include: Palácio Nacional de Sintra (www.parquesdesintra.pt), which was inhabited for nearly eight centuries by the Portuguese monarchy; the impressive 40,000m2 Palácio Nacional de Mafra (www.palaciomafra.pt), one of Europe’s largest monuments; Pousada Palmela, which remains one of the best examples of architectural fortresses in Portugal (www.pousadas.pt/historicalhotels); and Palácio Nacional da Ajuda, the royal family’s last permanent residence, that nowadays hosts official receptions for the President of the Republic (www.palacioajuda.pt).