In true Virgin style, the airline’s founder arrived alongside “Birthday Girl”, the first 787 Dreamliner introduced to the Virgin Atlantic network, in a Union Jack-branded MINI (also our roadtest in this issue), waving at surprised passengers as they boarded the flight to London.

Once on board, Branson served drinks to all and then led the entire aircraft in traditional birthday party games, from pass-the-parcel to lucky draws, all at 38,000ft.

Virgin Atlantic began flying to and from South Africa in October 1996 with an Airbus A340, and now operates a daily flight to Heathrow on the B787-900.

Branson said: “We took a leap of faith 20 years ago by operating our first flight into Africa. We didn’t know if people would choose to fly with us, but we believed that offering competitive fares between Johannesburg and London was essential.

“South Africa welcomed us with open arms, and the route quickly became one of the most popular on our network. I’m pleased millions of our customers have explored this beautiful country with us, and we look forward to welcoming millions more over the next 20 years.” 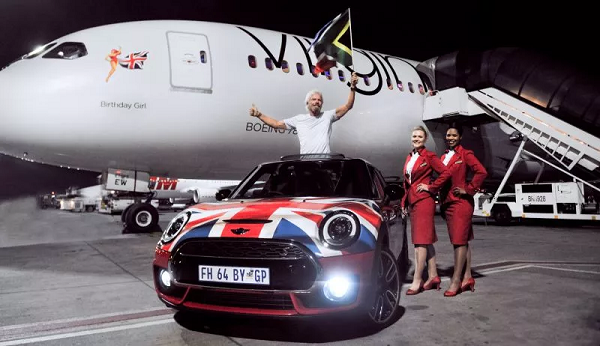