Baboo is a Swiss airline 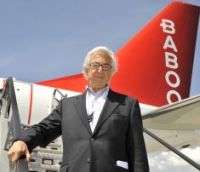 BABOO may sound a strange name for English speakers but it is a Swiss airline that will shortly be flying out of two UK airports.  Baboo was founded in Geneva in 2003 and currently operates two Bombardier Q400s and three Embraer 190s.  From Geneva it serves 19 destinations.  On 26 October the airline will introduce a twice daily service to London City Airport, using a Q400, in direct competition with British Airways and Lufthansa.  However it will code-share with Air France/Cityjet. Saturday 19 December sees it introduce the first ever international operation out of Oxford Airport, a weekly ski flight that is already attracting considerable interest. Also see ERA below  www.flybaboo.com