We review the Berlitz Guide 2010 and take a look at the market in general.  For the December cruise news we will be reporting on Queen Mary 2 and its transatlantic programme for next year.  If you are new to cruising read An Introduction to Cruising in the AERBT archive 20 April 2009. 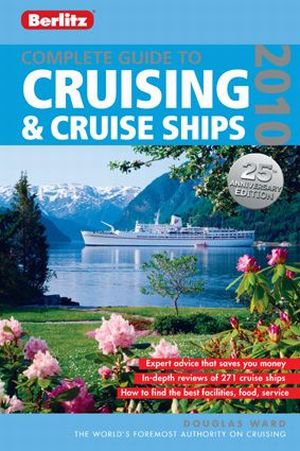 If some of the cruising deals promoted over the past year seemed too good to be true, they probably were, according to Douglas Ward, cruise guru and author of the annual Berlitz Complete Guide to Cruising and Cruise Ships.  Just published, the 25th edition, remains the only source of independent star-rating of virtually all ocean going cruise ships worldwide.

Within the 2010 Guide, he suggests that although it is a buyer’s market, an effect of the credit crunch, it is crucial to study the small print.  As cruise lines have taken their cue from outfits like Ryanair which charge supplements for almost everything, the range of add-ons in cruising can take the glow off an apparent give-away price.  A highly discounted fare may apply only to certain dates and itineraries, while passengers preferred cabin grades and location may not be available or they may be limited to first seating at dinner.  Nevertheless the Guide is packed with tips on how to get the best deals which we learn aren’t necessarily available on the internet.

It is a very thick and heavy book, 692 pages as against 686 last time around, but don’t’ be completely fooled.  Some of the 271 ships are virtually identical and so are the reviews.  For Sapphire Princess read Diamond Princess.  Don’t’ bother to study both.  And they gain matching survey points.  Highlighted are 12 new ships set to debut in 2010.  Douglas examines the unstoppable growth of cruising over the past 25 years, what has gone in 25 years (only the Russians and Cunard have sail-aways these days), and what’s new but not necessarily an improvement.  There is a fresh new look at Green Cruising, with plenty of advice for those concerned about travelling responsibly.

Whilst it claims to be warts and all Ward could be harsher with some of the old ships now past their sell by date.  “A lovingly maintained classic” should be compared with the rating score.  Any ship with just 1,000 points or less is probably one to miss.  However at the other end of the scale Mr Ward clearly likes trying out the top suites, something we all aspire to but seldom attain.

The Guide also offers a comprehensive account of the industry today for the more experienced cruiser.  At a glance charts compare the major cruise lines for cabin facilities, food and service – their strengths and weaknesses.  Check out the tables and charts for 10 Great Shipboard Spas, the Best Choice for Children, the 10 Top Expeditions, the 20 Largest Suites Afloat or the 100 Most Popular Shore Excursions.

Ward confirms the various trends in cruising, including more two-class vessels and those banning the under 21-year-olds, an increase in the number of small ships offered, better and more varied themed restaurants, and a serious clamp down on smoking.  River cruise vessels are for the most part not listed.

Priced at a very reasonable £16.99 it will make for an interesting read on ‘no ports’ sea cruises.  For further information visit www.berlitzpublishing.com


AND OUR TEN NEWS HEADLINES

Passenger Shipping Association (PSA) Director William Gibbons has confirmed that the UK cruise industry is bucking the trend and continues to grow despite 2009 being one of the most challenging years on record for the wider holiday market.  Figures released at ABTA (see AERBT 12 October) show an impressive 5% increase in the number of British holidaymakers taking a cruise this year compared to 2008.  2010 will see the launch of 16 new cruise ships according to PSA, with the gigantic 220,000-ton, 5,400-passenger, RCCL Allure of the Sea, setting new standards in terms of size and what is on offer.  Will the three Queens come together at some point – Mary, Elizabeth and Victoria?  At the other end of the scale Sea Cloud Hussar is a 5,000-ton, 136-passenger luxury sailing schooner, a new ship from a bygone age. www.the-psa.co.uk

AMA, which used to be called Amadeus, and is a joint Australian/US initiative, is pushing hard regarding its up market European river cruise programme involving no flights, no Channel sea crossing, and the use of Eurostar.  There is a wide choice of trips available, many on the Rhine from Amsterdam, and also on the Danube.  Moscow and the waterways of Russia can also be reached via Warsaw in a fascinating cross country rail journey.  Each AMA river cruise includes all meals on board (breakfast, lunch, afternoon tea, dinner), unlimited wine with dinner, a daily sightseeing programme, on board folklore and musical performances, bicycles for use in port and free internet access.  First Class rail travel is included wherever possible, as well as four- or five-star hotels en route and the services of a friendly and professional Tour Manager. www.amawaterways.com

Compagnie du Ponant, the French cruise line, extremely up market, will add Le Boreal next year to its small fleet of very high class boutique ships including the somewhat unique three masted Le Ponant.  At 10,000 tons and 132 cabins, Le Boreal will be more like a super yacht, and can moor (and dock) in bays and ports not available for even mid-size cruise ships.  The summer programme for 2010 is essentially Mediterranean-based, although in July it will venture into the Baltic and even visit Reykjavik.  All the staff on board a Compagnie du Ponant cruise are totally fluent in both French and English. www.ponant.com

Crystal Cruises has announced details of what it calls its “Experiences of Discovery” theme cruises for 2010 (not to be confused with the British ship Discovery  and its not dissimilar voyages – albeit aimed at a different part of the market).  These are cruises designed to enrich those that want to involve themselves.  There are more than two dozen trips, each designed with a special-interest focus.  A new Science & Technology theme joins classic favourites such as Crystal’s Wine & Food Festival (set for seven cruises, with two back-to-back options), Mind, Body & Spirit, Jazz, Golf, Film & Theatre Festival and Big Band.  For next year the annual President’s Cruise adds special programming and events in celebration of the line’s 20th anniversary of luxury cruising.  www.crystalcruises.com

Hapag-Lloyd Cruises MS Hanseatic has left the Bredo shipyard in Bremerhaven (Germany) after a two-week stay.  Thoroughly overhauled and smartened up in many areas, the world’s only five-star expedition ship (according to the Berlitz Cruise Guide 2010) has been much upgraded, both behind the scenes and in the public areas.  The Hanseatic combines the adventure of global expedition and study cruises with first class comfort.  It offers the maximum of 184 passengers the opportunity to travel to remote destinations in polar waters or in the South Seas.  Its shallow draft means it can also sail on rivers like the Amazon.  Trips with the ship’s own Zodiac inflatables, talks and recaps about the destinations by lecturers are among the highlights of the programme.  Those top-flight experts accompany the cruises to deliver spellbinding background information.  The 2010 programme will be in English and German. www.hapag-lloyd.com

Norwegian Cruise Lines (NCL) is pushing ahead with promotions for Norwegian Epic currently under construction at Saint-Nazaire in France.  At 153,000 gross tons, the ship is Norwegian's largest with 19 decks, spanning 1,068 ft in length and 133 ft in width with a 28.5 ft draft, staffed with approximately 1,730 crew members.  Following delivery in mid-June 2010, Epic will sail to Rotterdam for a two-night maiden cruise departing on 19 June, followed by an overnighter to Southampton on 21 June.  What is called an inaugural cruise will take place from the port covering two nights, which will probably turn out to be something of a party.  Following her transatlantic crossing to New York on 24 June, the ship will be christened on 2 July and will continue with a three-night inaugural cruise over the 4 July weekend (another party?).  The ship's first seven-day Eastern Caribbean ex-Miami voyage is scheduled for 10 July and is currently on sale, along with the ship's alternating Western Caribbean sailings. www.ncl.com

P & O, by far the world’s oldest cruise line, is very aware than dining plays a vital part in the enjoyment of a cruise.  This is probably due for the most part that it appears to be free.  We are all taken (happily) in by the fact that the fare is inclusive.  With this in mind, and the fact that there are many out there who want to learn more about kitchen skills, the Southampton-based operation, part of the mighty Carnival Corporation, has engaged three Michelin starred chefs, Gary Rhodes, Marco Pierre White and Atul Kochhar on its ships during 2010.  The celebrated chefs will take part in cooking demonstrations, lessons and Q&A.  You will need to choose your dates, ship, destination and whether you want a child-free voyage.  And of course select your chef.  www.pocruises.co.uk

Princess Cruises has added a fun new cruise tour option designed especially with family groups in mind for its Alaska programme.  America’s 49th State is a wonderful travel destination for children, a real eye-opener for youngsters.  The 12-night cruise-tour offers the best of Alaska by land and sea and includes a variety of special features not usually included in this sort of package.  Families will have the opportunity to travel on a jetboat, pan for gold, take an interactive tour of Denali National Park, and experience what Alaska is like in the winter when it is many degrees below zero.  It includes a seven-night Voyage of the Glaciers cruise plus a five-night land tour featuring one night at Mt McKinley Princess Wilderness Lodge, two nights at Denali Princess Wilderness Lodge and two nights at Fairbanks Princess Riverside Lodge. www.princess.com

The International Association of Antarctica Tour Operators (IAATO) has made further recommendations designed to enhance marine safety on vessels operated by its members following the loss of Explorer of the South Shetlands in November 2007.  Clearly the public has to be put at ease.  The additional directives were the outcome of a mid-September meeting in London of the IAATO Marine Committee, and follow recommendations approved earlier this year by the association’s membership.  The initial set of recommendations to enhance marine safety, which included changes in standard operating procedures by IAATO vessel operators and modifications to the Association’s bylaws to strengthen the requirements for experience for bridge officers, can be found on the IAATO website.www.iaato.org/press.html

The Yachts of Seabourn has announced that the company will not operate a planned series of voyages in the Indian Ocean aboard Seabourn Legend in late 2010 and early 2011.  The vessel will instead be repositioned back to the Americas at the end of its Mediterranean season to cruise in the Caribbean over the winter.  Readers are reminded that Yachts of Seaborn are the top brand of Carnival Corporation, the world’s largest cruise ship operator, and traditionally has maintained three 10,000-ton 200-passenger ships with nearly as many crew as passengers.  This year Seabourn Odyssey arrived, 32,000 tons, 400 passengers and the last word in luxury. www.seabourn.com