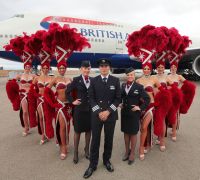 BRITISH AIRWAYS is to introduce a daily Las Vegas flight from Heathrow on 25 October in direct competition with Virgin Atlantic.  This probably is the first time that the UK’s flag carrier has gone head to head on a route pioneered by the Crawley-based airline.  The service will be operated by a three-class Boeing 777 offering 36 new Club World fully flat beds, 24 World Traveller Plus and 212 World Traveller seats.  Virgin first started the route in 2001 and has gradually built it up to a seven times per week service.  bmi’s operation from Manchester has been withdrawn and low cost Business Class contender Maxjet flew from Stansted before the airline folded in December 2007.  Observant readers will note that the photograph issued by the BA communications department is of a Boeing 747 and the pilot is probably a First Officer as he has three stripes. www.ba.com