Following last week’s Business Travel News ON THE SOAPBOX by Virendra Sharma, Member of Parliament for South Ealing, in which he dramatically changed his pro-Gatwick views, Jock Lowe, chief protagonist for the extended-runway scheme called Heathrow Hub, has pitched in to praise Sharma’s courage in promoting London's major airport. 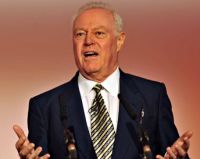 “We believe that our concept will cut noise and costs without reducing the quality of the project," Lowe said. "It is another example of British innovation and ingenuity as a nation, the way forward after Brexit. It has taken real courage for a local MP to hold his head up and say that for his community the way forward is an extended Heathrow."

Captain Lowe is retired Concorde chief pilot and former member of the British Airways Executive Board. His novel scheme, backed by some of the largest companies in British industry, proposes to extend Heathrow’s existing northern runway to a total length of around 6,800m. Dividing it in two, with a generous safety zone, creates two runways, allowing aircraft to land and take off simultaneously. Lowe says it creates less of a footprint than the Heathrow Airport Ltd proposal, and can be built more quickly and more cheaply.