This year, London Luton Airport is expected to move 14.8m passengers, an astonishing figure when one considers that in 1996 the figure was just 2.4m. The growth over the past two years has been 42%.

The airport can best be currently described as "work in progress" a euphumism for "not very pleasant".  However, rather like London Bridge Station (to which Luton is linked), travellers will just have to be patient.  According to airport ‎head of marketing and strategic affairs Oliver Jaycock, "it will be worth waiting for".

It is interesting to compare Luton with north London rival Stansted, which this year is expected finally to surpass its 2008 record of 24m passengers. Stansted is owned by the Manchester Airports Group (MAN) – 10 local councils and an Australian investor – while Luton is a partnership between Aena Aeropuertos of Spain, and the freeholder, the local council. Ryanair represents 80% of Stansted passengers, while Luton has added seven airlines this year, making 16 in total.

The airport says that the dual carriageway to the terminal will be completed in October and planning approval is about to be sought for a light railway link to Luton Parkway for completion in 2020 – significantly for the town, the same target date for a new football stadium and commercial complex.  www.london-luton.com 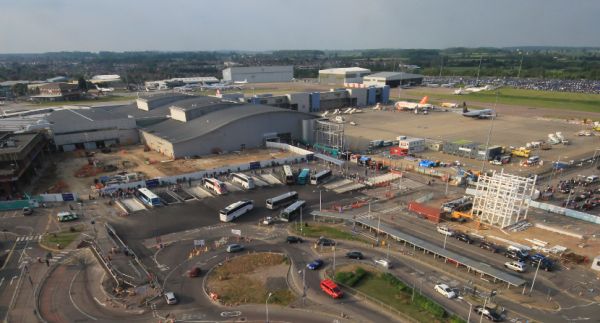 At the moment, Luton Airport isn't linked by rail to London Bridge because of work in progress! The major reconstruction work there has reduced capacity to such an extent that Thameslink trains have been re-routed away from London Bridge for the time being. But that too will be worth waiting for!