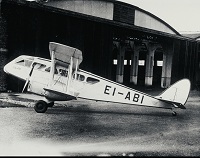 The infant airline’s inaugural flight took place on 27 May 1936 between Baldonnel in Ireland and Bristol.

To mark the anniversary, Aer Lingus flew the Iolar, a replica of the six-seat de Havilland 84 Dragon that made the first journey, along the route again.

The national carrier now boasts a fleet of 62 aircraft and connects 12m people from Ireland and across the world to more than 100 destinations throughout Europe and North America.

The 10 direct services to North America are now joined by the three new routes, with Los Angeles taking off on 4 May, Newark on 1 September and Hartford on 28 September.

Another feature of the network is the range of daily flights from across the UK regions and 18 flights from London alone direct to the airline’s Dublin Airport hub.

Aer Lingus also offers seamless same-terminal connections and US Immigration and Customs pre-clearance at Dublin, so passengers can start maximising their time in the US from the moment they land.

Passengers in all classes on transatlantic flights have pre-assigned seating, free meals and soft drinks and on board wi-fi.