Guest of honour at London’s Aviation Club last week was Bjorn Kjos, the colourful CEO of Norwegian Air (ex-paratrooper, pilot as well as an airline boss, and now a banker too).

Asked if Britain should stay in the EU he said that while his country was not a member his airline was, and the UK should stay in.  “But it is up to the British people”. 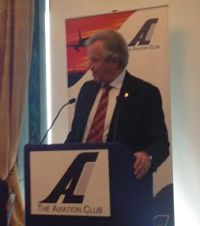 In a far ranging speech he defended the use of Thai aircrew saying that the airline has more US-based crew than any other foreign airline.

The airline was established in 1993 and is now third largest low-cost airline in Europe and the seventh in the world, serving 130 global destinations and 26 million passengers yearly.

On the subject of expansion at Gatwick (the airport’s CEO Steward Wingate was in the audience) he said that it was the way forward for London “the world’s greatest city”.  If Gatwick gained a new runway he would commit 50 Boeing 787 Dreamliners to the airport, pointing out that each plane creates 23 new pilot jobs and 70 cabin crew.

He noted that with long haul low-cost Norwegian was the market leader with more than 30 transatlantic routes and load factors well over 90%. See also Cork Airport in this issue.  www.norwegian.com