The entry level jets have arrived (ELJ).  Forget the term VLJ (very light jets).  This description does not go down well with banks and insurance companies, whose movers and shakers have never seen a jet of any shape or size, except perhaps an Airbus or Boeing on the way to a holiday.

That perhaps was the most important message from a two-day conference at the recently renamed London Oxford Airport last week.  Promulgating this view was eminent aviation law firm Gates and Partners.  The lawyers, one of the sponsors of the gathering, did manage to persuade the delegates that next year's event should adapt the title Light Jets Europe.  With a brand new Embraer Phenom proudly sitting on the Oxford apron there was proof positive of the changing aviation scene, a very serious smaller jet produced by the world’s fourth largest aircraft manufacture.

The Phenom made its maiden flight in July 2007, and its first delivery in December 2008.  The 72nd aircraft leaves the factory later this week. 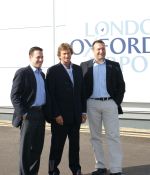 Times are tough for everyone, but particularly in the world of the business jet.  The Eclipse 500 ELJ went into service at the beginning of 2007, but by the middle of 2008 the company was bust with around 250 built.  Dayjet, its largest customer, did not last much longer and in September 2008 it too folded.

The two leading operators in the UK, London Executive Aviation (LEA) and Blink disagreed on the success of the industry’s newest genre to date.  Edwin Brenninkmeyer from Oriens Advisors, newly established specialist consultants in the VLJ market, stated that the VLJ sector was in a state of evolution, not revolution.  Eclipse is slowly coming back in the game with new investment bankers; Honda is entering it with its distinctive looking HondaJet set to start type certification flying in January 2010, but the two clear leaders in the sector are Cessna and Embraer with the Citation Mustang and Phenom 100, respectively.

Delegates heard that these small jet operators must realise they operate in a wider business aviation market which is supportive, but communication is all important.  Airports, said London Oxford’s Managing Director Steve Jones, need to know what they require; Eurocontrol needs to be able to integrate them into existing air traffic routes; training academies need to understand crew requirements, and operators, owners and purchasers must take the time to understand the complexity of the infrastructure around purchasing, operating and maintaining aircraft.

The principals of low cost airlines

LEA, which combines the same type with six other larger business jets in its fleet, averages 346 hours annually with 1,854 flying hours a year in total on its Mustangs.  It has postponed and cancelled Mustang orders and does not believe everything is rosy in the garden.

“The VLJ sector is still an unproven market.  The industry expectation several years ago that VLJs would bring low-cost business aviation has not happened,” said LEA CEO Patrick Margetson-Rushmore.  “The reality is that while operating VLJs costs less than operating larger business jets, it is by no means cheap.  In terms of price, we still have tough competition with aircraft such as the Cessna Citation CJ1 and CJ2, the Hawker Beechcraft Premier 1 and small turboprops.”  Having been a charter operator for 15 years, and a Mustang operator for two, Margetson argued that a hybrid approach for the LEA Citation Mustang, enabling a combination of owner, manager and charter usage was the way forward.

Jetbird, a Cologne-based newcomer, (which has ordered 59 Phenom 100s) hopes to be operating this side of Christmas, pending confirmation of its Air Operating Certificate (AOC).  It has four aircraft in Brazil awaiting delivery, said Chief Executive Officer Stefan Vilner.  Vilner, one time former boss of the low cost airline Sterling, praised the attributes of the Phenom 100 as the aircraft to beat for its spacious cabin, design and its aft, enclosed lavatory.  With onerous commercial airline experiences, Jetbird anticipates an increasing number of airline passengers will move towards the air taxi model through the simple need to save time and work more efficiently.

Cambridge Marshall Airport-based Ambeo, which received its first Cessna Citation Mustang earlier this year, announced the launch of a new partnership, the Jetworld Alliance, with Privatair of Switzerland and Sky Taxi of the Netherlands.  This innovative alliance sees Ambeo, Privatair and Sky Taxi joining forces to ensure the customer has access to all types of aviation requirements through one source and reflects the general consensus that each customer's requirements will be different.

Ambeo too is awaiting its AOC so it can commence revenue operations.  Meanwhile the UK’s FlairJet has a team of experts now preparing the manuals and pilots undergoing type rating so that after CAA inspection it can bring its first two aircraft back from Brazil.  Delegates heard that attaining this was not an easy road.  They were also warned of the tax implications and the danger of under insuring.  Operators were encouraged to seek professional advice at an early stage to avoid expensive and legal complication at a later stage.

In an encouraging note, Joe Leader of the Air Taxi Association reported he recently met with the CEO and COO of British Airways and they were both interested and supportive of this business model.  Maybe one day British Airways will be embracing small business jets, just like Delta in the US and Lufthansa and Swiss International in Europe.  There was optimism too from Alex Hendricks, Deputy Director at Eurocontrol.  When the air transport industry starts to recover, business aviation will lead and these small jets, owing to their low costs, will be well placed to win market share.  He also highlighted, however, ahead of the Low Cost Airline Summit in Barcelona next week, that the budget airline market has seen its first fall off in traffic in 15 years.