Following its successful introduction into Europe (see  BTN  1 September) Moxy by Marriott will introduce a further five hotels in 2016 including for the first time the UK. 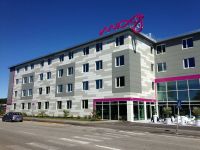 In addition to the five European properties, there will be two new openings in the United States in Tempe, Arizona in March and New Orleans, Louisiana in April.  The brand expects to offer a portfolio of nearly 150 hotels around the world within the next 10 years.

In partnership with Vastint Hospitality as the owner and developer and franchise partner, Nordic Hospitality, the following Moxy hotels are expected to open by the year’s end: