Aviation Minister Robert Goodwill has visited Cornwall Airport Newquay and the adjoining Aerohub to see how Government investment is helping to regenerate interest in what was once RAF St Mawgan. 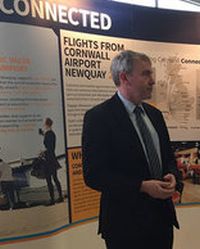 Passenger numbers at Cornwall Airport Newquay increased by 15% to 252,000 last year.  This is forecast to increase to 375,000 this year thanks to the introduction of new routes, including a Newquay to Leeds Bradford service funded by the Government’s £7m Regional Air Connectivity Fund.  The Government also provides financial support for the Flybe Newquay to Gatwick service.

Following Cornwall Council’s announcement that it was removing the £5 Airport Development Fee (ADF) levy from 27 March, the airport has seen the introduction of a number of new routes for summer 2016 including Aberdeen, Doncaster, Liverpool, Glasgow, Alicante, Hahn as well as an increased schedule to Dublin.  These are in addition to the summer routes, including year-round flights to Manchester and Gatwick and daily services to the Isles of Scilly.  Other existing routes include Belfast, Birmingham, Edinburgh, Newcastle plus from 2016 Düsseldorf.

The airport is on the short list for the UK’s first spaceport which also includes Campbeltown, Llanbedr, Prestwick and Stornoway airports.  www.newquaycornwallairport.com