While EU membership is not as crucial in aviation as it is for other companies, German businesses would “feel alone without you guys,” Carsten Spohr, CEO of Lufthansa, responded last Wednesday (10 February) at the London Aviation Club when asked about the implications of a so-called Brexit.  “We will only have the socialist people around us like the French,” he explained making it clear he was rooting for Britain to stay in the European Union, “not least to maintain a political counterweight to the French”. 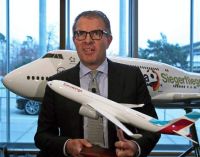 The former pilot’s speech was a fine balance of English humour and the very serious business of running an aviation group employing over 100,000 staff.  He was “born in 1966”, introducing himself to quiet chuckles, “But we did beat the Brazilians 7-1 in 2014”.

He said that the airline’s biggest problem as a privately owned but state airline was trying to cut costs.  Dealing with Unions representing very well paid pilots and cabin crew, leading to strikes, including the longest in its 60-year history, was not easy.

Spohr joined Lufthansa as a trainee pilot but these days only has time for the simulator.    www.lufthansa.com      www.aviationclub.org.uk