In partnership with British Women Pilots' Association (BWPA), the airlines will underwrite the funding for six female recruits through the initiative. 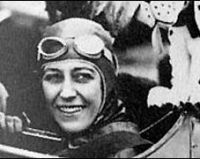 Currently women make up 6% of easyJet’s new pilot intake and the airline plans to double this to 12% over the next two years.  The launch of the initiative is one of the first parts of a long-term strategy to increase female pilots.  These first six ab initio pilots will have their training loan of around £100,000 underwritten by the airline.

Amy Johnson was the first woman to fly solo to Australia in 1930.  Originally from Hull, she gained her pilots licence in 1929 at the London Aero Club.  This year is the 75th anniversary of her death, while flying over the Thames Estuary for the Air Transport Auxiliary in 1941 during the Second World War.  www.bwpa.co.uk    www.easyjet.com