easyJet has unveiled plans for a hydrogen fuel cell system that would remove the need for aircraft to use their engines for taxiing.

The airline said that trials of the concept, developed by the airline and students at the Cranfield University, would take place later this year. 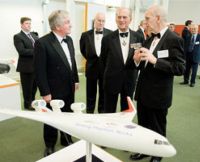 The low-cost carrier aims to reduce its passengers’ carbon footprint by 7% over the next five years, following on from a 28% reduction over the past 15 years.

It said that its short-haul, high-frequency operating philosophy means that around 4% of total fuel consumption is spent getting between the runway and terminal at the start and end of flights, a process that typically takes 20 minutes per sector.

The proposed system uses a hydrogen fuel cell and lightweight batteries in an aircraft’s underfloor hold. The system captures energy as the aircraft brakes on landing and uses this to charge the batteries.

That captured energy can then be used to power electric motors in the aircraft’s main undercarriage wheels, allowing the aircraft to taxi without using its engines.

The only waste product from the fuel cell system would be water – which easyJet suggests could be used to recharge the aircraft’s water system throughout flight.  www.cranfield.ac.uk/aerospace   www.easyjet.com