Surveillance video footage taken at Mogadishu airport shows two men handing what appears to be a laptop computer to the suspected suicide bomber of a Daallo Airlines A321 after he passed through a security checkpoint.

At least one of the men delivering the hand held device was an airport employee according to a Somali government spokesman.

Investigators also suspect the bomber was able to bypass rigorous security screening at the airport by boarding the flight in a wheelchair.  Officials confirmed the passenger, who fell from the plane, has been identified as Abdullahi Abdisalam Borleh, 55, from Somalia.

The bomber and many others on aboard the Airbus were originally checked in with Turkish Airlines, which cancelled its inbound flight due to bad weather.  The plan was for these passengers to transfer at Djibouti.

Talking to Al Jazeera, the Qatar-based news organisation, al-Shabab claimed to be behind the attack.

The Somalia-based terrorist group, which is aligned with al Qaeda, has increased efforts in recent months to regain control of lost territories in Somalia, while seeking to topple the country’s Western-backed government.  www.daallo.com 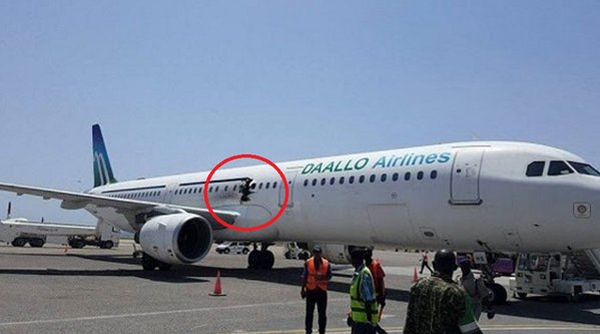